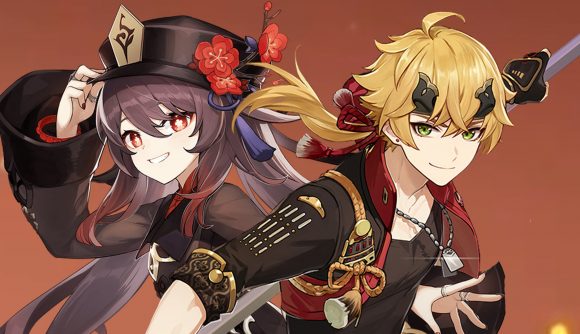 Developer Mihoyo has revealed that the Genshin Impact Hu Tao banner event ‘Moment of Bloom’ will return next week, giving players another chance to earn a 5-star version of the spooky character on Tuesday, November 2 – but most importantly, new four-star character Thoma will be available for the first time too.

Ghost-talking Pyro character Hu Tao’s banner first dropped in March this year and quickly proved very popular, especially due to the character having some of the best single-target damage in Genshin Impact – ensuring that Hu Tao would place highly on our tier list. Here’s our guide to help you put together a truly devastating build for Hu Tao.

However, despite being only a four-star character it’s Thoma who’s the real big deal here, since they’ve been appearing in Genshin Impact as an NPC all month but is now finally playable – and as a fellow Pyro character works well with Hu Tao. Four-star characters Diona and Saya will also be available with higher drop rates during this banner.

Hello, Travelers~ Paimon has got the scoop on the latest events. Click the picture below for a quick overview! The "Labyrinth Warriors" event is currently underway, so be sure not to miss it!

Still ongoing is the Labyrinth Warriors event in which you can earn yet another Pyro character for free, Xinyan – and that concludes on November 8. Running at the same time as the main banner is the usual ‘Epitome Invocation’ event that gives drop-rate boosts on several major weapons – including the event-exclusive five-star Staff of Homa (Polearm) and Elegy for the End (Bow), alongside the four-star weapons Wavebreaker’s Fin (Polearm) and Mouun’s Moon (Bow).

There’s always a lot going on in Genshin Impact, which is what makes it one of the best free-to-play games around on PC.