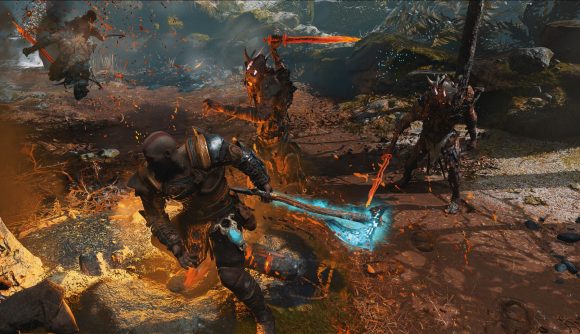 The PC edition of God of War adds a few nice features that take advantage of the platform’s many graphics options and formats available, and one of those is DLSS – Nvidia’s supersampling technology that upscales lower base resolutions to boost performance. A new patch for the action-adventure game adds a sharpness slider to that option, so you can fine-tune the amount of sharpening that occurs when you toggle it on.

The automatic sharpening with DLSS was causing graphical issues for some players, and this option should help ameliorate those in most cases. However, in this current edition, DLSS sharpening still can’t be fully turned off, even if the slider is set to zero. A developer from Santa Monica Studios says that’s an issue the team will correct in a future update.

The patch also corrects some additional graphics hardware issues, such as incorrect VRAM detection on Intel’s XE platform, and some instances of graphics driver crashes. The team says it’s also corrected a bug that would disable controls if you opened the inventory screen during the realm travel sequence.

You can check out the God of War system requirements, and review the best God of War settings for getting the optimal performance on your PC. And of course, our God of War PC review has our overall impressions of Kratos’ adventures in the north.