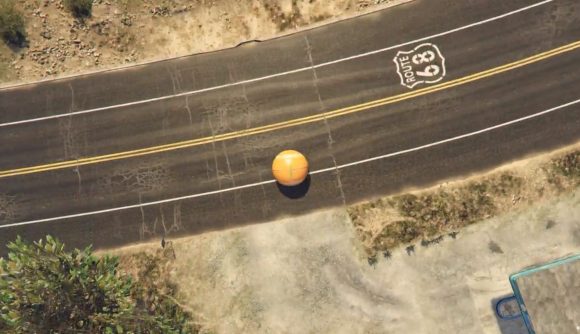 It’s always a bit… deflating to log into Grand Theft Auto Online and find that you’ve been targeted by hackers. There are any number of ways for cheaters to ruin your GTA Online experience – they could at one point even instantly kill you when you spawned in, and even now they’re still putting people in cages. But what about when you’re hit with something that’s a little less disruptive and just flat out strange? One Redditor’s answer was just to roll with it.

Redditor FragzinS was hopping in to GTA Online the other day for a casual afternoon of robbing banks or something (who knows, people get up to some weird stuff in GTA Online). Suddenly FragzinS discovered they had been encased in a large orange ball that completely obscured their character model and made it impossible to go through doors.

The solution? Hop on a motorcycle and crank some Creedence Clearwater Revival. FragzinS climbed on their Bati 801 and went screaming around the Grand Senora Desert, ball be damned. There’s something glorious about a large orange ball with ‘BIG’ written on it flying over ridges and up dirt trails to the tune of Fortunate Son.

A Modder Decided to Turn Me Into a Ball in GTA Online, So I Made The Best Out Of It from gtaonline

It’s more than a little reminiscent of the film Rubber, isn’t it?

There are ways to counter this kind of thing, as several commenters point out – you can simply restart GTA Online and find another session, which is probably the most straightforward approach. Or you can use a cheat menu yourself to disable the hacker’s mod, although this opens you up to punitive action from Rockstar.

We like FragzinS’s approach to dealing with GTA Online hacking: when life hands you huge oranges, you make huge orange juice, and you kick it to some good old southern rock ‘n roll.