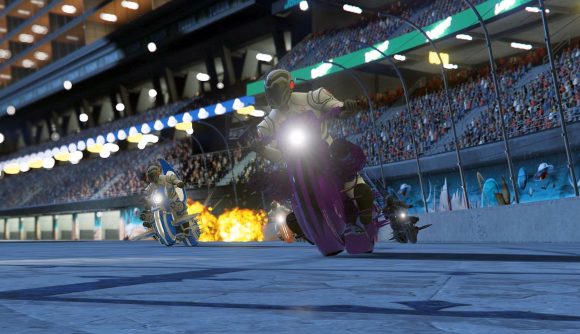 It’s that time of the week again, GTA Online fans. A new update has hit the multiplayer crime game’s servers, and the good folk of Los Santos are having a look around to see what’s new for this week’s drop. Rockstar Games will post the full rundown on its newswire later today, but with the update’s goodies, discounts, and new podium car now live, why wait for a look-see?

In the multiplayer game’s new weekly update you’re getting the chance to scoop up double the rewards for GTA Online’s Arena War modes. In case you need a refresher, these are the series of (primarily PvP) missions introduced with the game’s 2018 Arena War content update, which play out in the huge Maze Bank Arena, and feature a bunch of weapon devices and traps to use to emerge victorious.

This week, the modes will hand out double GTA$, RP, and arena points – the latter being for the Arena War-specific experience system, which you can use to grab some rewards if you have an arena workshop. Additionally, GTA Online’s Rhino Hunt adversary mode and Special Vehicle Work missions will also be dishing out double GTA$ and RP this week.

This week’s GTA Online podium car is the sporty Comet SR, while the premium race is Congestion Charge, time trial is Stab City, and RC Time Trial is Cypress Flats. You can check out the full range of discounts and other details below, via Tez2 on Twitter:

If you’re on the lookout for some GTA 5 mods and GTA 5 cheats to give a whirl while you’re offline, you know where to click.