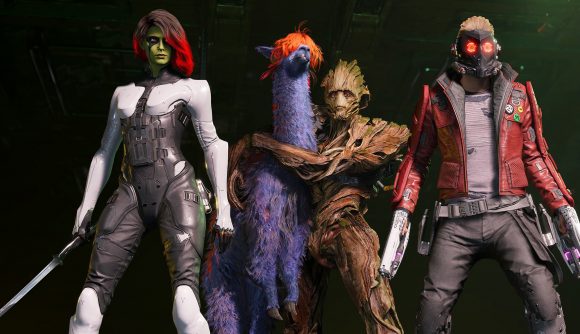 Marvel’s Guardians of the Galaxy game was revealed at E3 earlier this week, and fans were immediately intrigued by the weird purple space llama that crops up a few times in the trailer. The game’s official Twitter account has revealed the llama’s name, and it’s one that fans think has a familiar connection to the comics.

The weird and definitely Fortnite-esque purple llama pops up most notably in the final group shot of the trailer, where Groot is holding it for some inexplicable reason. It may even live on the Guardians’ ship during the game. It certainly has the attention of fans, including Guardians of the Galaxy movie director James Gunn, who tweeted his support for the beast.

A fan asked the official Twitter account for the Guardians game what the llama’s name was and was replied to with the confirmation that the creature’s name was Kammy. This was all very cute, except that fans immediately pointed out that there is a major Guardians of the Galaxy character called Cammi – to who this may be a reference.

Cammi is a young girl who appeared in Drax The Destroyer #1 in 2005, created by Keith Giffen and Mitch Breitweiser, shortly after the release of the first movie. She was a major part of Drax’s series and would fight alongside him in the Avengers Arena series. In her first appearance, she helped Drax defend her hometown from the Blood Brothers, who also feature in the game and can be seen in the trailer.

We have a space llama in here.

I repeat: we have a space llama. pic.twitter.com/oaD472lu25

At the moment there is no reason to think that Kammy the Llama has any particular connection to Cammi the Human Girl, and doing so will lead any fan down a rabbit hole of conspiratorial craziness the likes of which there is no coming back from. Still, it is possible that it’s a reference or that Drax names the llama after his friend Cammi. For now, though, just be happy the mystery of the weird space llama’s name has been solved.

The Guardians of the Galaxy game is one of our most anticipated upcoming games, especially because it’s coming from Deus Ex: Human Revolution developer Eidos Montreal and that it will be a single-player-only game without microtransactions or DLC. Hopefully it’ll prove less controversial than the Avengers game, anyway.