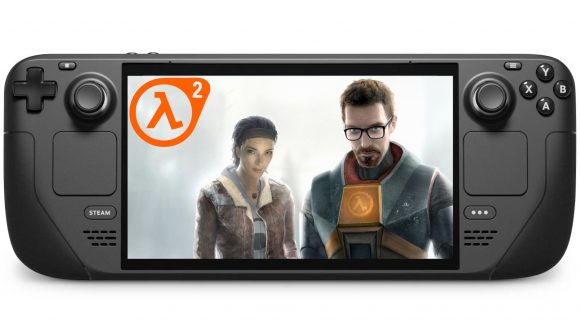 There are fewer video game series more important than Half-Life, particularly when it comes to PC gaming. While the first game challenged perceptions of the importance of narrative within FPS games, Half-Life 2 pushed the best graphics cards and best gaming CPUs of its era with never before seen heights of visual fidelity and its innovative physics engine. It also ushered in a new era of PC gaming with the Steam platform. Now, 17 years later, Valve has updated its classic title with its biggest patch in over 10 years.

As highlighted by YouTuber Tyler McVicker, a new beta branch is now available to download via the game’s beta tab in Steam. While there are currently no official patch notes for this version of Half-Life 2, numerous technical improvements have already been quickly discerned.

The game’s HUD now scales with the selected rendering resolution, having been previously locked, resulting in larger elements on aspect ratios outside 4:3. There’s also support for ultrawide resolutions, with an FOV ceiling of 110 that is enabled without having to modify DLL files.

Half-Life 2 now also has a Vulkan renderer, which has undoubtedly been added for greater compatibility for Valve’s upcoming Steam Deck, which uses a Proton compatibility layer atop its Linux OS. This change also ties in to the company’s recently announced ‘Deck Verified’ compatibility program, which aims to aid players quickly grasp how well a game runs on the Steam Deck, if at all.

A recent report, analysing the top 100 games on Steam, put compatibility with the Steam Deck at 69%, with the remaining 31% staying incompatible predominantly due to issues with anti-cheat measures. Thankfully, major providers are already patching their solutions to ensure that more games will work on Valve’s new system.