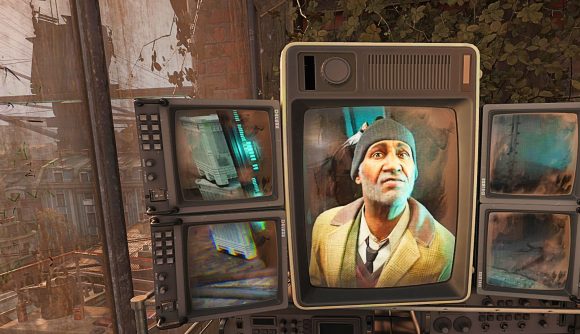 In Half-Life: Alyx, Alyx keeps in touch with other characters by means of a video chat station she has set up in a room overlooking the Citadel. It’s normally where she picks up some vital information about what she’s about to go do, but that can change. It turns out, the messages are simple media files you can find in the Alyx folder directory, and they can be easily replaced with… well, with anything.

It takes a bit of tinkering to get to work, but ultimately what you have to do is replace the video file called intro_world_heist.webm in the Half-Life: Alyx directory (you’ll probably want to back up the original if you don’t want to re-verify your install). Give that exact file name to the webm file you want to see on the screen, and in theory you should be in business.

A Twitter user who goes by @Nitomatta managed to get a clip from The Eric Andre Show to run on Alyx’s ad hoc bank of monitors. It’s the ‘What If It Was Purple’ bit, and @Nitomatta flailing their hands around in the air at each reveal is weirdly hilarious.

“Nothing about this game is that intense,” remarks comedian Hannibal Burress, which just makes it funnier.

Now this is how The Eric Andre Show was meant to be watched. pic.twitter.com/YmUVrcdLq9

Here’s another example, this one using an ad for Big Bill Hell’s fictional Baltimore car dealership:

So it turns out that some of the monitor footage inside of #HalfLifeAlyx are just webms inside a folder, AKA you can change it to whatever you want. Already contributed my part pic.twitter.com/9pJxD9gP2j

Again, it’s mainly a matter of swapping out webm files, so if you’ve got a clip that’s right around 50 seconds long and in webm format, you can probably get it to work on Alyx’s video screens.

As mentioned above, remember A) to back up the original file and B) that there’s plenty of other stuff you can do while watching your custom video clips. And when you’re done being a big goof, check out our Half-Life: Alyx review.