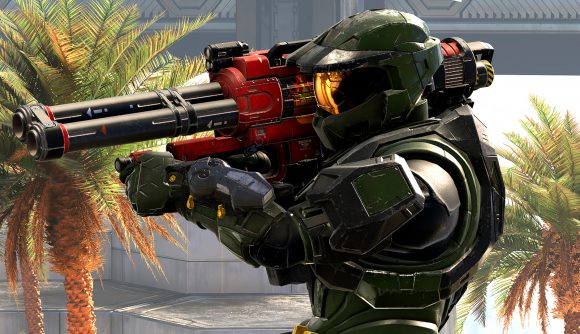 343 Industries has detailed a load of Halo Infinite Season 2 changes coming to the FPS game thanks to Season 1 community feedback. Last week, fans were promised that Halo Infinite Lone Wolves details were coming “really soon” and here’s the first batch, it seems.

In the new Season 1 outcomes report, the Halo Infinite team reveals the “key feedback areas” it is focusing on for Season 2 of the multiplayer game, as collected from player surveys, telemetry data, and direct feedback on the forums and social media. While the report doesn’t “cover all the upcoming work” coming in Season 2 and beyond, the developer provides a lot of changes that are.

While we already knew the Halo Infinite Season 2 release date and that there will be at least one new map for Arena and Big Team Battle, the report details many improvements and quality-of-life changes that should help Halo Infinite feel better – including more accessibility options and playlists that include King of the Hill and Attrition game modes.

Vehicles receiving changes include the Banshee, Chopper, Warthog,  Razorback. The motion tracker range will be corrected, and matchmaking will get improved – although not the ability to opt-out of crossplay, apparently. Oh, and most importantly, the sound effect for the Grunt Birthday Party will be turned up a bit.

On the PC side, the team has apparently fixed “dozens of PC crashes” and added some “noticeable stability improvements”, including some performance bumps – including with the ‘Drop Wall’ ability, which shouldn’t affect performance as much. As for accessibility options, the team is looking into more colour-blind settings and audio visualization. Check out the full report for further changes coming.

In our Outcomes report for Season 1 of #HaloInfinite, we're responding directly to community feedback. Read up to see what the team is going after for Season 2, and beyond, based on your input.

343 is also aiming to add campaign co-op during Season 2, although Forge mode is delayed to Season 3.