However cool all of Humankind’s big bright ideas sound in theory, they work even better in practice. That’s my takeaway from a day with an early build of the historical 4X by Amplitude, the biggest game in the genre yet to tackle the same subject matter as Sid Meier’s Civilization.

In multiple arenas, the potential is clear for Humankind to be both a better historical playground and a better videogame than Civ. Take combat. Until Civ V, winning a war in Firaxis’s series was solely a matter of outproducing and/or out-‘sciencing’ your opponent, pumping their cities full of stacked units until they could take no more. In Humankind, it’s possible to overcome such odds through canny leadership.

When a battle begins, the participating armies unstack and spread their units across the map, as we’ve known since the game’s announcement at Gamescom last year. What wasn’t apparent then is quite how profoundly this changes warfare: by turtling on a mountain in the back of the battlefield, I’m able to defeat an enemy army of four units with a scouting party of just an archer and a warrior (who was wounded).

I’m not saying it was worthy of Napoleon or anything, but history is full of rousing stories of military triumph against overwhelming odds as canny generals like him exploited the terrain, positioned their troops well, or brought reinforcements to bear. All of that is possible to some degree in Humankind: there are the usual penalties and buffs for attacking over rivers, for pitting spearmen against cavalry, and for deploying hoplites in formation, but logistics beyond the battlefield matter too. 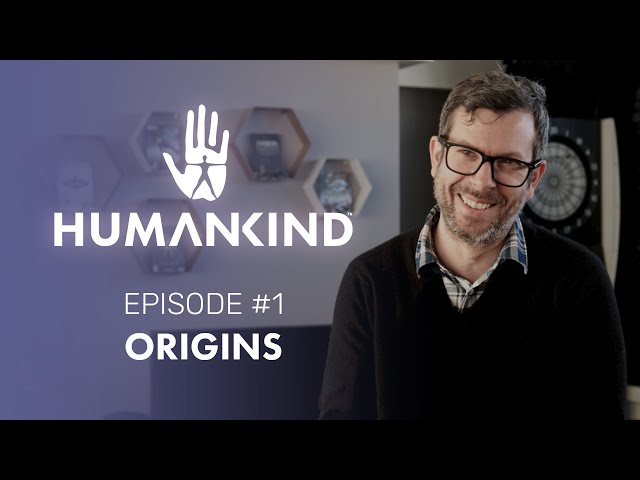 Each turn on the world map contains only three battle turns, and if neither side has won by then, the fight continues on the next global turn. This means more armies can arrive and join in as reinforcements. For all these reasons and more, it’s possible to win battles – or at least, inflict such damage as to change the course of a war in the longer term – that would be utterly hopeless in Civ.

It’s not only more capable of rewarding cleverness, it also captures something of humanity’s obsession with glorifying conflict that, like it or not, is redolent throughout history. I imagine that the bards of Babylon will one day sing of the victory won by their Bronze Age ancestors, when they were far from home and nigh-overwhelmed by endless Harappan hordes. In Civ, the same scenario ends with: ‘Oh well, that’s that scout screwed.’ 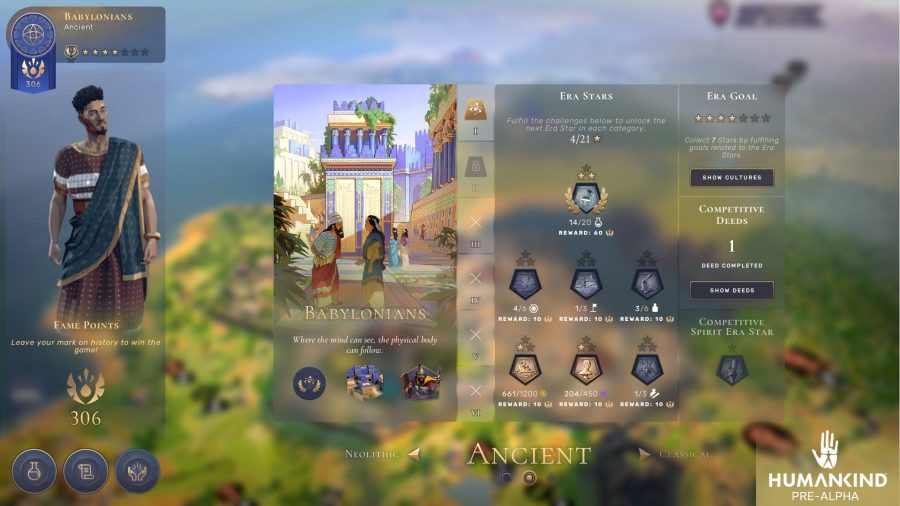 That’s who I was playing in the demo, by the way: Babylon. From Alpha Centauri’s Provost Zakharov to Babylon’s stupidly overpowered equivalent in Civ V, my go-to strategy in 4Xes when I don’t know any better is to go for the nerds, as everything else follows from science. Humankind’s biggest idea, though, is that you’ll choose a culture to integrate with your civilisation at every era, reflecting the fact that few if any civilisations in history have been truly monocultural for any real length of time.

This is a risk. Again, assimilating cultures sounds cool and authentic in theory, but I wasn’t sure how it would work in practice: picking my faction in Civ, with its static bonuses geared towards one or two victory types, is my favourite decision in the whole game. However, in my Gathering Storm review I also complain that Civ is far less good at posing interesting questions during the game, so clearly there’s a prize on offer here. And Humankind claims it in style.

Part of its success is getting rid of those victory types: your goal is simply to accrue the most ‘Fame’. There are two main sources of that: world deeds, which are competitive achievements like being the first to discover a natural wonder or build a Holy Site, and era stars, which represent progress in the game’s seven areas of endeavour – you can earn up to three stars per era for researching technologies, earning money, killing enemies, and so on. 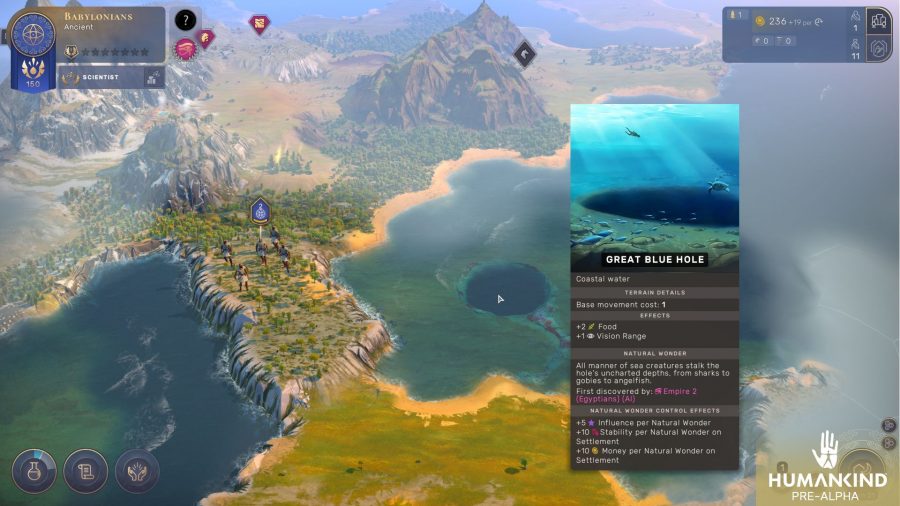 Rather than pursue a mostly static, brittle strategy throughout the game, this means you get the option to reconsider that strategy as you transition eras based on how things have gone, and how well positioned you are to claim particular sources of Fame. My demo ends either when I reach the Classical Era or after 60 turns elapse (I hit the Classical Era at turn 36, then reloaded a previous save to play the full 60), and I find myself considering options for my next culture that I would never have expected when I started the game, based entirely on how the Ancient Era had gone.

More like this: Check out the best 4X games on PC

Why? In a word: ransacking. As you can ‘pillage’ infrastructure in Civ, so can you ‘ransack’ things like resource mines and outposts (which any military unit can build to claim territory) in Humankind. After learning how lucrative this was – it yields as much as 3,000 money – I ransack everything in sight and have more money than I can spend. I buy out city buildings, mines, tile improvements, and yes, lots and lots of armies, with which I wipe out my neighbours – the Egyptians and Harappans – and find myself, accidentally, a monstrous warmonger. (Don’t worry; the devs say they know ransacking is broken and will tune it before release.) 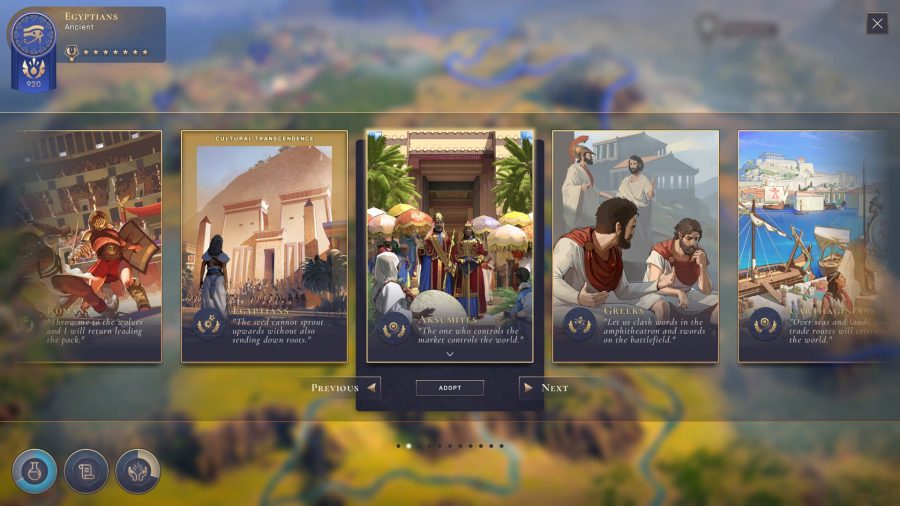 This casts new light on my Classical Era culture choice. Where my vague ambitions of scientific supremacy would’ve once led me to look favourably at the Greeks, I’m instead considering cultures that’ll give me the most mileage for this sudden cash and bloodlust. I go with the Carthaginians for their -50% discount on buyout costs (as if I need any more money) and their potent War Elephant unique unit. I can’t wait to see how this plays out over the course of a full game: it’s like having Civ’s most interesting decision – which faction to pick – multiple times over.

It reflects an organic quality to Humankind that isn’t present in Civ – one which not only makes more sense as a representation of history, but which Amplitude has brilliantly translated into gameplay. Another example is in Humankind’s treatment of politics and ideology. In Civ V and VI, earning Culture unlocks ideologies or government types with a choice of fixed perks. In Humankind, however, your political culture grows from seeds planted by simple decisions that fall from how you play.

When I recruit five military units, I’m asked ‘Who should fight for the empire, conscripts or professional soldiers?’ If I have a Civic point to spend – gained through Influence, a currency similar to Civ’s Culture – then I can take a view: professionalism grants an immediate +1 combat strength for all units, while conscription knocks 20% off their production cost instead. Additionally, these decisions nudge your civilisation along four different ideological sliders (which I reckon should become the new standard for mapping political thought, as they capture it far more effectively than the traditional left/right spectrum, which is looking frighteningly outdated these days with harmful consequences for discourse, but I digress). 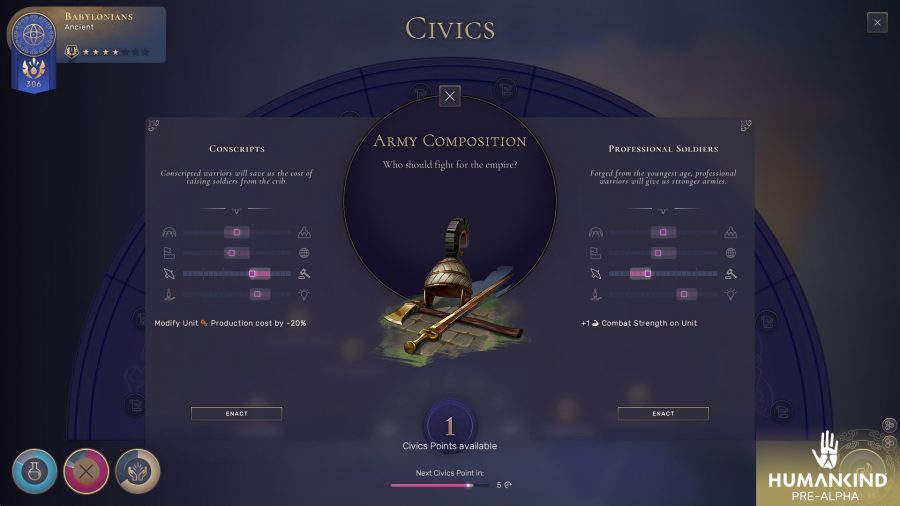 These sliders are geopolitical outlook, with ‘homeland’ at one extreme and ‘world’ at the other; economics (collectivism vs individualism); culture (tradition vs progress); and government (authoritarian vs liberal). As you draw closer to an extreme on any slider, you get increasingly powerful buffs: a more authoritarian government gets more FIMS (food, industry, money, science) yields on the capital, while a liberal one gets more FIMS on cities without an administrator – the obvious choice if you’re playing ‘wide’, in strategy parlance.

It's not much, but I miss Sean Bean quoting Monty Python to me when I discover new technologies

Your ideology seeps across the map in ways that, again, reflect history. A rare chance to reverse a civics decision occurs when my people demand a change from codified laws to customary ones thanks to the influence of the Harappans; I refuse, and suffer -5 stability for ten turns. If a neighbouring civ is both influential and ideologically comparable to you, it’ll be harder to attack them without upsetting your people. Earlier in the game, though, the influence of the Egyptians triggers a technological osmosis event, in which I can instantly discover irrigation by spending some of my boundless piles of money.

The lack of any downsides means those ideology sliders fall into Mass Effect’s Paragon vs Renegade trap of making extreme positions the automatic best choice, erasing nuances that they probably ought to capture somehow given that they’re mapping the entirety of political thought, but as with much else Humankind does, this system is more organic, natural-seeming, and satisfying to engage with than Civ’s equivalent. 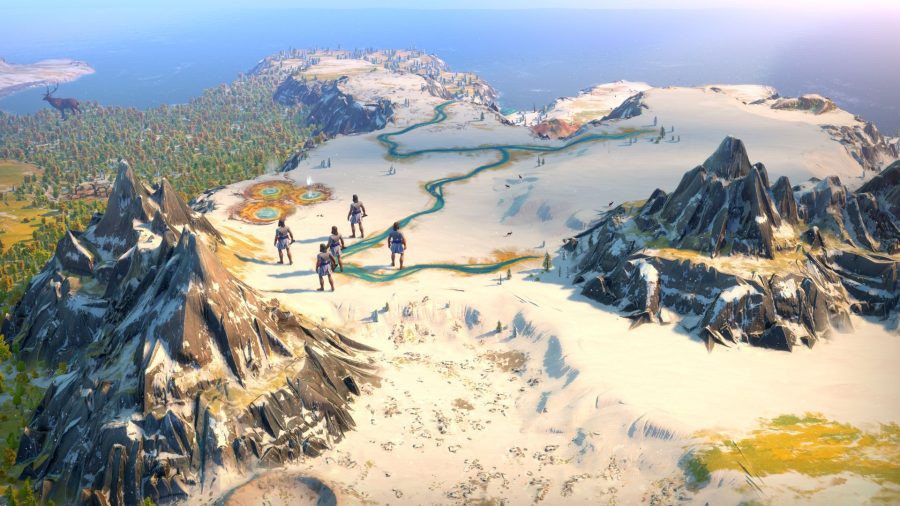 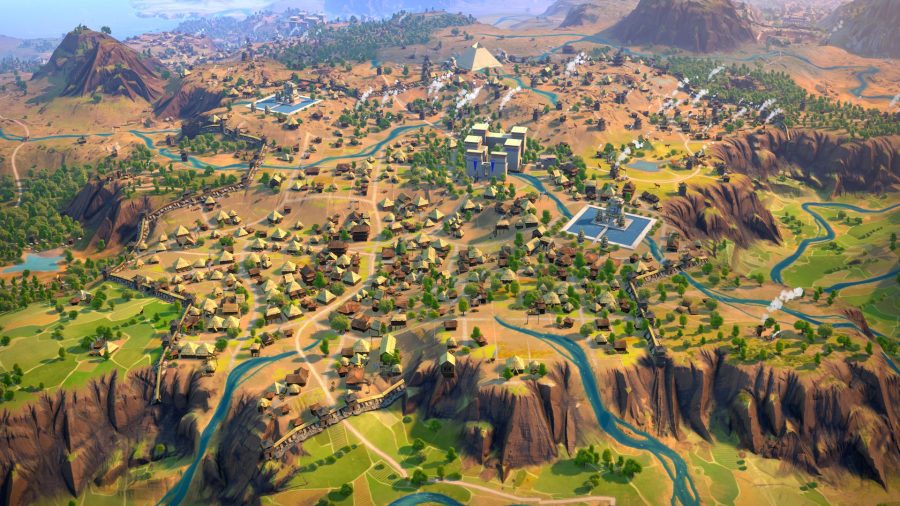 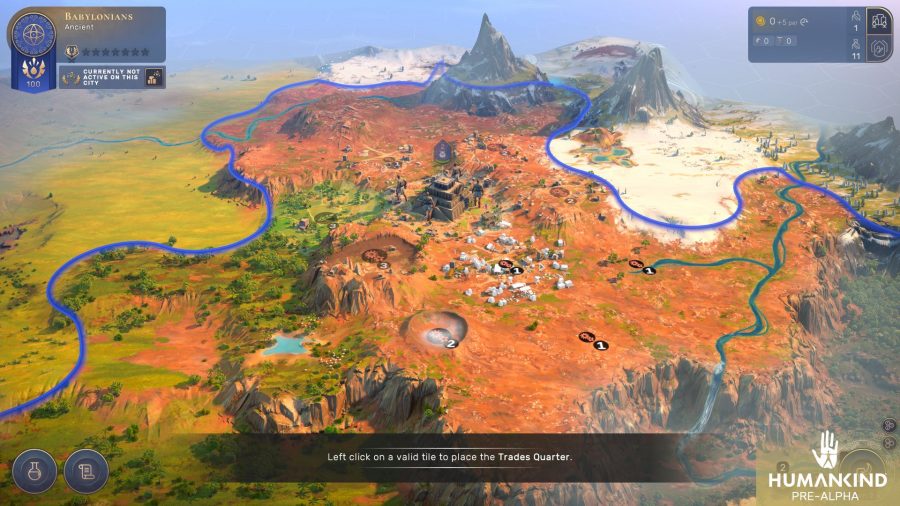 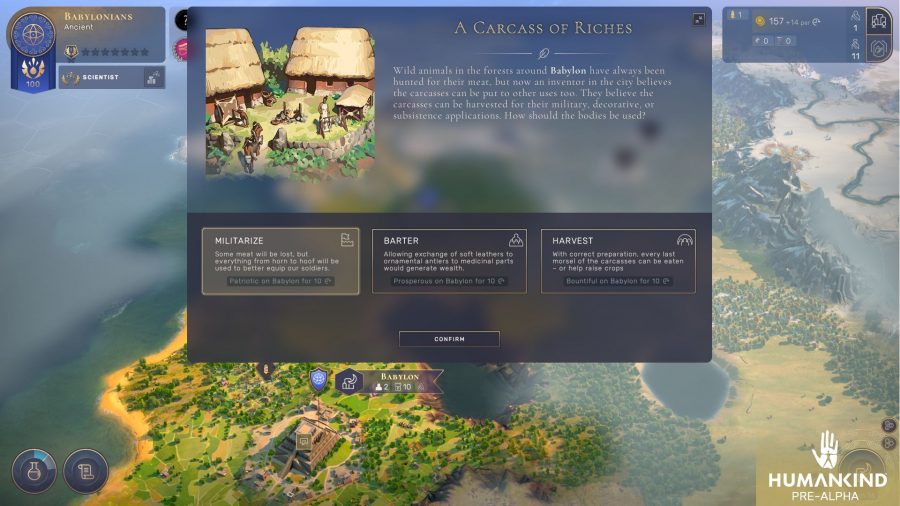 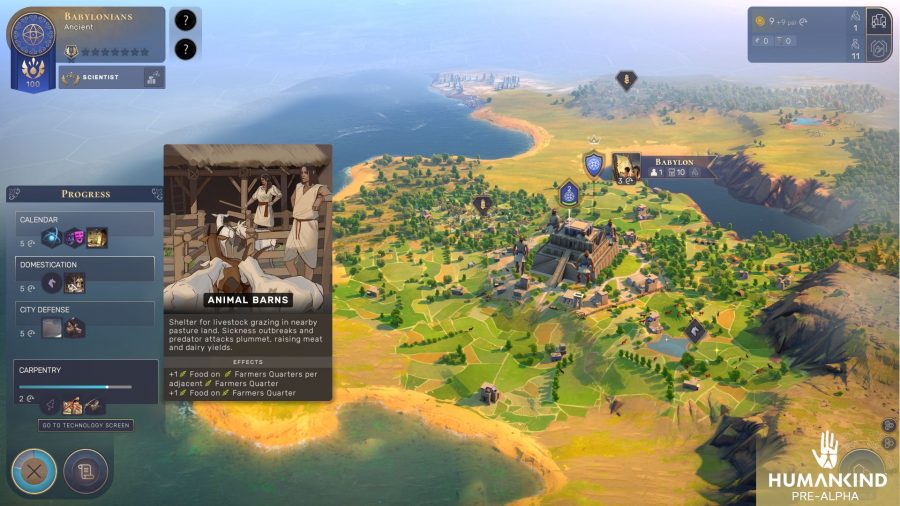 It wasn’t all gravy, sure. I came across a terrifying visual bug that showered the map in blood-drenched trees, and there’s a lot of tuning still to be done beyond ransacking – artificial wonders, notably, feel too weak. Many systems were disabled in the build I played, including religion, trade, and diplomacy. It would also be nice if the impact of certain decisions was more readable – a pop-up in the UI previewing how my city FIMS are affected by each of my building options would be very helpful.

Related: What would we like to see in Civilization 7?

One would expect technical and balance issues at pre-alpha stage, of course, but a concern that might remain is that Amplitude’s games, despite being generally brilliant, have always struck me as a little cold. Humankind is the same. It looks terrific – its map and artwork are both gorgeous – but it’s polished, clinical competence, with a lack of flair and joy: there’s no sense of ceremony, no little construction movie, when I manage to build the Temple of Artemis, and no Sean Bean quoting Monty Python when I discover new technologies. It’s not fatal, but it’s something I do miss from Civ. Hopefully when diplomacy is added and we get to see our evolving avatars chatting with everyone else, we’ll see a little more soul creep in.

In every other respect though, I’m hugely excited for Humankind. All those clever ideas that were teased at the announcement are, if anything, revealed to be even smarter in practice.