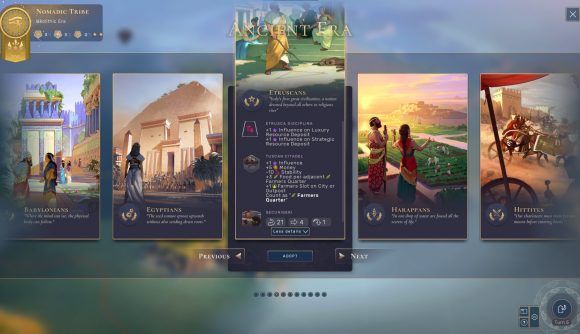 It’s been less than two weeks since the arrival of 4X game Humankind’s official mod tools, but players are already pumping out new content at a rapid pace. Modders are creating loads of new cultures for each era, so if you haven’t seen your favourite in the game yet, it’s probably just a matter of time before it’s available.

Humankind is structured such that modders don’t have to replace existing cultures or their emblematic units or districts, to add their own. They all just slot right into the game, and they’re easy to set up and use thanks to the mod.io integration.

For the Ancient Era, you might want to try the nomadic Scythians, which are a militarist culture with a horse lord as its emblematic unit and the Kurgan emblematic district. They get +1 industry from industry tiles, and a +2 to their experience gain. Or you might opt for the Etruscans, aesthetes who can build the Etruscan citadel and field axe-wielding securigeri. One mod even adds seven North American cultures that date back to the Ancient-era Alutiiq people, which are represented here as an Agrarian culture with a legacy trait called ‘Our Way of Living’ that adds +1 food to sterile terrain and grants -15% on food consumption.

For the Classical Era, modders have created the Numidians and the Han Empire, but the number of culture mods balloons when you hit the medieval era: you can download mods for the Inca, the Galicians, the Bagratid Armenians, the Normans, and the Kilwans. Each one has its own affinity, legacy trait, emblematic district, and emblematic unit – and there are countless more already.

A modder who goes by uncle2fire has also created a handy guide to creating new cultures for Humankind, which will walk you through the entire process step by step.

I’ve just finished with a step-by-step walkthrough on how to create a custom culture. from HumankindTheGame

We’ll have to update our list of the best Humankind mods once we’ve had a look through what the player community has been creating. But one thing seems clear: players are running with the opportunity to expand Humankind even further.