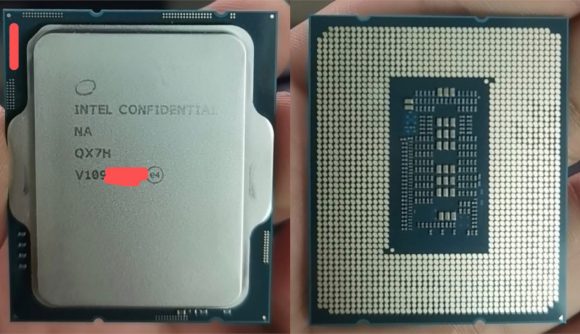 Less than a month from Intel Innovation, the rumoured official reveal event for Intel’s Alder Lake processors, black market vendors in China are reportedly selling numerous Intel Core i9-12900K engineering samples. As revealed by Yuuki_ans in several tweets, The CPUs are selling for an average of ¥4500 CNY (approx. $700 USD / £520 GBP / €600) but the official MSRP of the flagship chip is still unknown.

It’s important to stress that these engineering samples likely don’t reflect the performance of any Alder Lake processor, with minor bugs and typically lower frequencies when compared to final retail units. The chips also play coy with their identities and bear no clear indication of what CPU they are. Instead, they’re simply described as ‘Intel Confidential’. Suffice to say, we don’t recommend most people buy these.

However, should these samples find their way into the hands of those equipped with Z690 motherboards then we could see even more productivity and gaming benchmarks of the Core i9-12900K leak out into the wild.

This isn’t the first time that pre-production versions of Intel’s Alder Lake CPUs have found their way into the Chinese black market, with previous listings of the Core i9-12900K costing up to $1,000 USD. However, it’s likely that the flagship processor will cost somewhere around $540-$799 USD based on the prices of the company’s current best gaming CPU, the Core i9-11900K, and AMD’s Ryzen 9 5950X.

Despite being decidedly much further away from release, there have also been plenty of leaks on Intel’s upcoming discrete Alchemist GPU. Despite enjoying support from wider industry partners like Asus and MSI, reports suggest that the card’s ability to compete with Nvidia’s RTX 3070 may be in doubt. The most recent specification leak surrounding team blue’s graphics card points to the card being similar to a mobile RTX 3060.