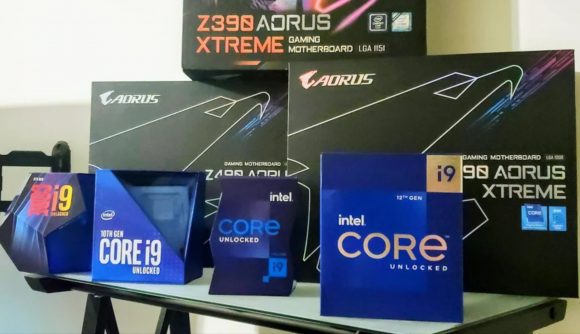 Intel officially revealed its Alder Lake desktop processors on October 27, and you can pre-order them right now if you can find any in stock. While they won’t land on shelves until November 4, a lucky few are already getting to grips with what’s shaping up to be the best gaming CPU around, the Core i9-12900K.

Several users on the Intel subreddit claim to have their hands on the flagship i9-12900K ahead of release, some complete with pictures of the product packaging. While buyers receiving their shiny new tech prior to the official street date is nothing new, some also claim that retailer Newegg has called them and explicitly asked them not to disclose their early shipment.

It’s understandable why Newegg would do this, as we’re sure Intel won’t be best pleased, but as these people aren’t bound by an NDA, there’s very little that can be done to correct this mistake. However, it appears that no one has received Z690 motherboards alongside their early processor, and so we’ll have to wait a little longer for third-party performance benchmarks.

In the meantime, there are plenty of details on Alder Lake and the benefits of the Z690 chipset to digest. If you’re looking to bag a 12th generation processor for your gaming PC, you’ll need to cough up $384-$589 USD, with KF skews costing $25 USD less than their K counterparts thanks to an omission of integrated graphics.

The CPUs are the first chips to support PCIe Gen 5 and DDR5 gaming RAM, via the Z690 chipset. If you’re fortunate enough to own one of the best graphic cards along with your Alder Lake processor, you might want to consider an Asus motherboard. Its new ‘PCIe Q-release’ feature should help get bulky GPUs out from their slot with ease.