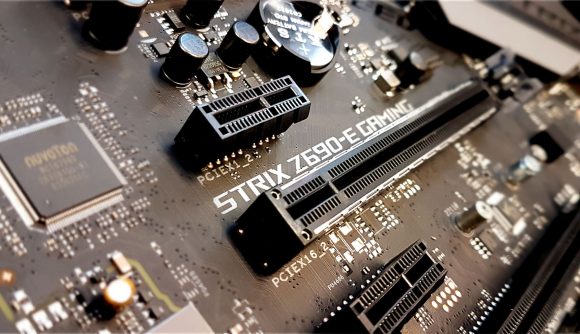 Given how different Intel’s Alder Lake hybrid architecture is from its predecessors, it’s unsurprising that its arrival ushers in a new chipset. Z690 comes with some universal features, such as support for PCIe Gen 5 and DDR5 gaming RAM, but you may want to consider pairing team blue’s upcoming processors with an Asus motherboard thanks to a simple but smart addition.

Hardware leaker Momomo_us (via Videocardz) has captured a screenshot of an Asus ROG Strix motherboard product page, which details the new ‘PCIe Slot Q-release’ feature. Through the press of a button on the motherboard, users are able to unlock the first PCIe slot’s security latch, removing the need to fish behind the bulk of the best graphics cards to manually toggle the latch.

It’s unclear whether this feature will make its way to more budget-oriented motherboards like those using the previously leaked H670 and B660 chipsets, but Alder Lake’s reveal event scheduled for tomorrow should lead to more detailed product pages popping up.

Intel’s 12th generation chips are shaping up to be some of the best gaming CPUs money can buy. Recently leaked benchmarks show the Core i5-12600K handily outclassing AMD’s Ryzen 5 5600X, in both single-threaded and multi-threaded CPU-Z tests. Meanwhile, the flagship Core i9-12900K could be the all-in-one solution for best in class gaming and production workloads, according to further leaks.

However, Alder Lake’s unique silicon makeup leaves it with some equally unique challenges. Recent reports highlight that existing CPU coolers may have issues properly cooling Intel’s new processors, despite manufacturers offering new compatible brackets. Then, of course, innovative and top-of-the-line performance doesn’t come cheap, with retailers listing the Core i9-12900K’s price at almost as much as an Nvidia RTX 3080 GPU.