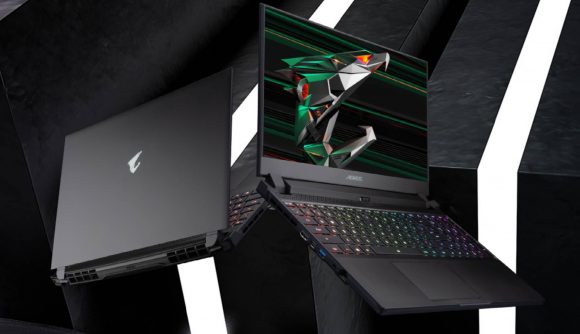 Intel’s Alder Lake desktop processors are already taking the gaming PC scene by storm, but whether or not the blue team holds the gaming CPU crown is up for debate. Thanks to a leaked benchmark for Gigabyte’s Aorus 15 YE4 gaming laptop, it looks like the company could be one step closer to the throne, as an upcoming i7-12800H mobile looks to be 25% faster than AMD’s equivalent chip.

According to the Geekbench listing, Intel’s i7-12800H Alder Lake-P scored 1,654 during single-core tests, putting it 345 points ahead of AMD’s Ryzen 5800H. The chip also pulled ahead of the red team’s offerings in multicore performance with a score of 9,618, but the fact it wasn’t able to surpass the Core i7-12700H means early boost clock issues could be hampering this processor’s true abilities.

Intel’s laptop lineup of Alder Lake CPUs is expected to drop in 2022, so it hopefully won’t be long until we’re able to get a taste of the mobile chip’s true potential. However, while things look promising for the blue team, a Zen 3+ APU could come out swinging against Alder Lake in terms of integrated graphics card performance, and AMD’s upcoming Zen 4 CPU contender could also rise to the challenge if released next year.