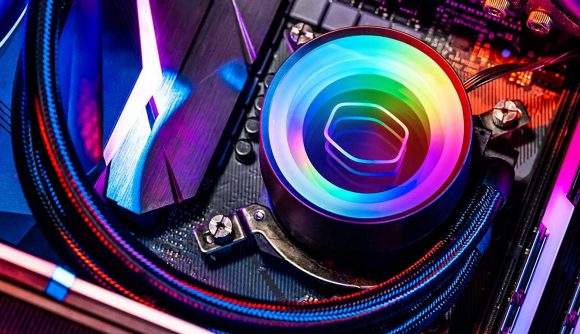 Intel’s 12th gen Core processors have received much fanfare and praise for their performance levels, particularly in comparison to previous generations. However, earlier reports of Alder Lake’s larger LGA 1700 socket creating some concerning compatibility issues have seemingly been confirmed.

An investigation conducted by WCCF Tech sources found that several AIO water coolers are unable to make even contact across the CPU, despite using socket-specific brackets provided by manufacturers in upgrade kits. This is concerning as uneven contact can negatively impact cooling performance, which in turn affects the chips’ ability to maintain higher clock speeds.

This issue appears to affect some cooler designs more than others, with AIOs like the MSI 360R V2 and MSI P360/C360 making perfect contact with the chip while the Aorus Waterforce X360 and ROG Ryugin 360 are troubling imperfect. No prolonged clock speed measurements or thermal metrics were recorded but it’s safe to assume that this would impact a processor’s performance to some degree, especially given Alder Lake’s tendency to run rather hot regardless.

In addition to these problems, Intel’s decision to build its CPUs with a heterogeneous core design has made several major titles unplayable on the new chips. Thankfully, the company is working with developers to get the affected games up and running and there is a workaround that early adopters can use for now.

Once these bugs are resolved, Intel’s Alder Lake processors will rank even higher among the best gaming CPUs available today. It remains to be seen how AMD’s Zen 4 chips will perform in comparison but finding one could prove difficult, as cryptocurrency miners are looking to buy up any Ryzen processor with a large amount of L3 cache.