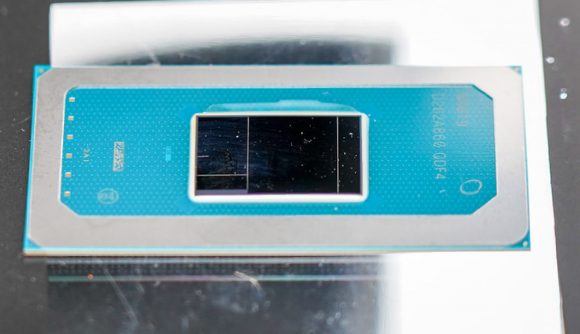 Raptor Lake hasn’t arrived yet, but that didn’t stop Intel Meteor Lake gaming CPU packages from making an appearance at the company’s Vision event. The showcased chips give us a glimpse at the 14th gen processor’s design, including a smaller package that aims to bring the tech to future handheld gaming PC devices.

Shared by PC Watch, the Intel Meteor Lake CPU packages comprise normal and high-density designs, both of which feature the same configuration. Naturally, the larger variant will cater to devices like gaming laptops, while the latter is intended for smaller machines. Upon closer inspection, it looks like Meteor Lake will ditch PCH (Platform Controller Hub) dies, as it seemingly merges it into a four tie-die instead.

Intel’s new tile approach to CPU design should facilitate flexibility, as it’ll let the company swap out configurations to create new variants. The tech giant hasn’t unveiled any Meteor Lake desktop chips, but it did previously confirm that scaled up 125W models are coming (via Wccftech).

You could say Intel is getting ahead of itself, especially since Alder Lake is still fighting to sit on the best gaming CPU throne. Yet, it’s exciting to see what the company is cooking up when it comes to next-gen processor tech, even if we need to wait until 2023. The fact that Raptor lake is reportedly 40% faster than its predecessor means Meteor Lake will likely feature monstrous abilities, meaning an AMD Zen 4 successor is in for a fight.