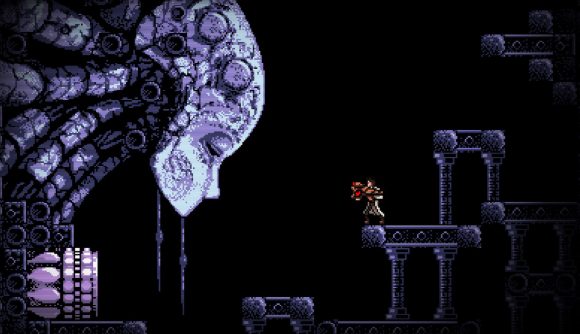 The latest free game on the Epic Games store is the Jackbox Party Pack, and the new rotation means we also know what game’s coming up next – the excellent indie Metroidvania Axiom Verge. The changeover happens on February 7, so you know how long you have to claim the current game and how long you’ll have to wait for the next.

Since it launched in December, the Epic Store has been offering a new free game every two weeks. It kicked off with Subnautica, which it followed up with Super Meat Boy. The most recent offering was the excellent What Remains of Edith Finch, which was available until today.

Now you can get 2014’s Jackbox Party Pack free through Epic’s storefront. It’s a collection of games you can play with up to 100 other players in the same room, with each player using their phone (or other internet-connected device) as a controller. There’s the classic You Don’t Know Jack trivia game, bluff-fest Fibbage XL, horrible drawing contest Drawful, Word Spud, and Lie Swatter.

That giveaway ends on February 7, when Axiom Verge enters the rotation. In the admittedly glutted space of independently-developed Metroidvania’s AV stands apart for its grungy aesthetics and weirdo sci-fi toolset. It’s also got a ripping soundtrack – take a listen. Those notes are nasty.

Naturally, the idea behind giving all this away for free is to encourage you to create an Epic account to use in the store, and to get players used to using Epic’s store instead of Steam.

Gaming on a budget? Check out the best free PC games

As long as you don’t mind that, all you have to do to get your free copy of the Jackbox Party Pack is to log in, click the appropriate banner at the top of the store’s main page, and place your order, which will amount to $0.00. From there, you’ll be able to install the game through the Epic launcher.