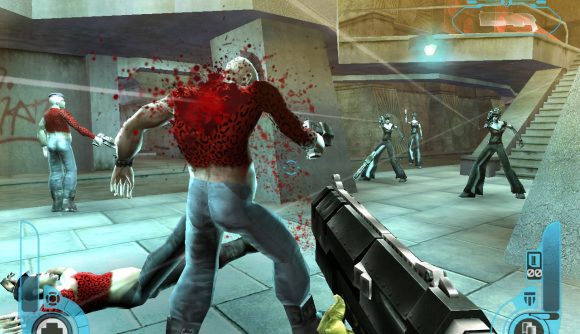 Sniper Elite developer Rebellion will be showing a new, unannounced game at E3 in the coming weeks, along with Evil Genius 2 and Sniper Elite VR. While the UK-based indie publisher hasn’t yet said what its new title is, there’s reason to believe it might be a Judge Dredd game.

Rebellion will be revealing the new game at the PC Gaming Show June 10, and officially they’ve kept mum about what it might be. But it bears remembering that Rebellion owns the rights to games based on the 2000 AD comics imprint, and that magazine is the home of Judge Dredd, as well as quite a few other science fiction comics series.

Back in 2017, Rebellion CEO Jason Kingsley told us that the company had opened their doors to third party developers and publishers who were seeking to use the rights to 2000 AD’s library, and Kingsley hinted last year that we might be seeing something along these lines before long. But there’s been no official confirmation on which property, which developer, or even the type of game they might have planned.

All Kinglsey has said so far is that “an announcement is coming.”

We're delighted to confirm that we're going to be bringing THREE titles to @E3 2019;

Timeline wise, though, this year’s E3 would probably be right for that kind of announcement, and my money’s on Dredd. But 2000 AD has countless storylines ripe for the picking, so if Rebellion has decided to move forward on a game from that collection of properties, it’s guaranteed to be interesting. The fact that Rebellion calls this a “major” title suggests to me that it’s Dredd, who out of all of 2000 AD’s characters is easily the most well-known.

The last Judge Dredd game Rebellion produced with 2005’s Judge Dredd: Dredd vs. Death, which doesn’t necessarily hold up well to today’s shooters but is admittedly sitting on a 88% “very positive” rating on Steam. We’re certainly overdue for a new trip back to Mega-City One – but we’ll find out more at E3.