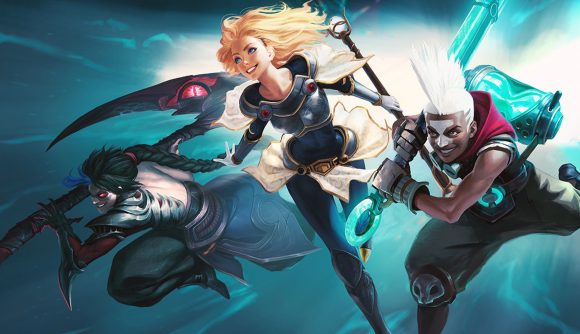 Remember One for All? The arcade-style League of Legends LTM that got players taking charge of the same Champion and fighting it out against another in a 5v5 team battle? It hasn’t been seen in-game for about two years, but now it’s back – it’s just hit the MOBA game’s PBE servers with LoL patch 10.6.

As highlighted in the current patch notes, Riot has announced the return of the mode on Twitter, and invited players to jump in early while it’s in for testing. Game mode designer Geoff Marsi offers an idea of what the newest incarnation of One for All, which was last seen on April Fools’ Day 2018, will bring: “There are a bunch of new faces to see and new combos to try, from Sett’s bounce-house to the Yuumi mothership! We’re also experimenting with a number of changes to make games quicker and smoother.

“Hop in and let us know what you think,” he adds, including a list of the new and reworked Champs for the mode’s return.

The description also says Riot wants games in the mode to be “nice and snappy” with a “little bit of laning, a mid-game fiesta, a touch of late-game action, and then over”. The studio explains it wants to avoid “trapped games” in particular, and has added a bunch of “little changes here, from gold and experience to towers and Baron scaling”.

One for All works by getting the five players on a team to vote for the Champ they’d all like to play in the coming match, instead of having a Champion draft. Once the winning character’s selected, each player uses that same one to battle it out against the opposing team.

One For All is now active on PBE!

There are a bunch of new faces to see and new combos to try, from Sett's bounce-house to the Yuumi mothership! We're also experimenting with a number of changes to make games quicker and smoother.

Hop in and let us know what you think ♥️ pic.twitter.com/3soEl7graj

While you can jump into the mode on the testing servers right now, One for All is due to go live when LoL patch 10.6 drops – which, according to the 2020 League of Legends patch schedule, should be March 18.

In the meantime, be sure to take a look at our LoL tier list to find out which are the best League of Legends Champions to be playing right now. There’s also a LoL skins and Champions sale on this week if you’re in the market for a new character or style – take a look to see what’s on offer.