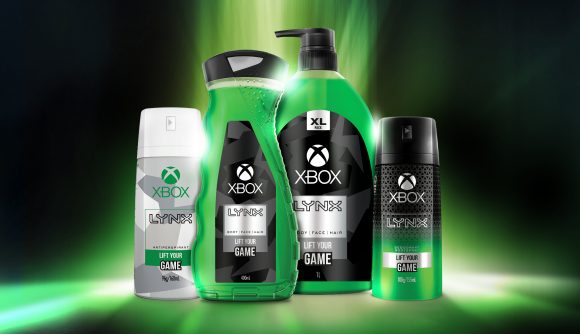 E3’s still not kicking off in earnest until this weekend, but Microsoft’s knocking it out of the park with the announcement of a massive Xbox exclusive: a new line of scented hygiene products. Xbox-branded deodorant, shower gel, and body spray is coming to Australia and New Zealand in July, courtesy of Lynx – better known in North America as Axe. The rest of the E3 2019 press conference schedule can only disappoint from here.

“Lynx Xbox is a fresh scent of pulsing green citrus,” the official description (via GameSpot) tells us, “featuring top notes of kaffir lime and winter lemon, aromatic herbal middle notes of mint and sage, and woody bottom notes of patchouli and clearwood. Containing a range of natural essential oils, the Xbox Lynx range comes with a sleek new look and features a body spray, deodorant, and shower gel.”

ANZ Xbox chief Tania Chee goes so far as to call this a way for gamers to “power up” before heading out after their morning routine. Sadly, there is not yet any indication as to whether this release will head anywhere outside of Australia and New Zealand. (Fingers crossed.)

If you’re more interested in games than hygiene products (you weirdo), you can expect to see Halo Infinite gameplay and maybe even a Fable 4 reveal among Microsoft’s big E3 showings this year.

The E3 2019 games lineup is looking mighty promising, even though it’s one of the typically slow gap years between console releases. At least we’ll have the fresh scent of pulsing green citrus to help us through the wait for all these releases.