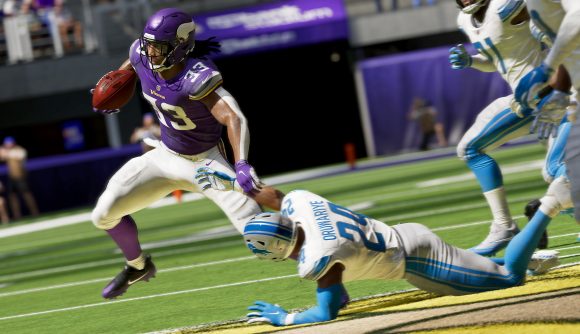 The latest Madden game, Madden NFL 21, will receive a day one patch to alter Washington’s team name as the American football franchise has decided to rebrand itself. After nearly a century, the Washington NFL team will no longer go by the term Redskins, a derogatory slur for Native Americans, instead switching to a new, to-be-decided moniker.

EA will reflect Washington’s decision in this year’s Madden, but since the NFL simulation game is coming out next month, changing the data on the disc itself is no longer feasible. Instead, an update will be available as soon as players install and launch the sports title, replacing Washington’s moniker and logos with generic counter-parts until the official new label for the team is announced.

“We are pleased to see Washington’s decision to change their team name and visual identity,” EA told USGamer in a statement. “We are quickly working to update Madden NFL 21 to feature a generic Washington team, while we await final word on the updated team name and logo design.” All the major instances of the Redskins symbology will be gone, including audio and commentary mentions, though some smaller appearances are likely to slip through the cracks at first as EA works to scrub every inch around launch.

Criticism has long been leveled at the Washington team for its use of a racial epithet in its name. Continued demonstrations in support of the Black Lives Matter movement precipitated renewed pressure on management to consider some different branding. Finally, the change was announced this week, the team’s Twitter saying that owner Dan Snyder and Coach Rivera were looking into what Washington’s new label would be.

This comes as EA Sports revealed it’s working on ways to improve the in-game experience for players encountering bigotry and toxicity. Call of Duty: Modern Warfare and Team Fortress 2 are getting the same treatment, the confederate flag was banned from all Forza games, and Rockstar is trying, but struggling, to clamp down on racist behaviour in Red Dead Redemption 2. EA Madden 21 will launch on Steam August 21.