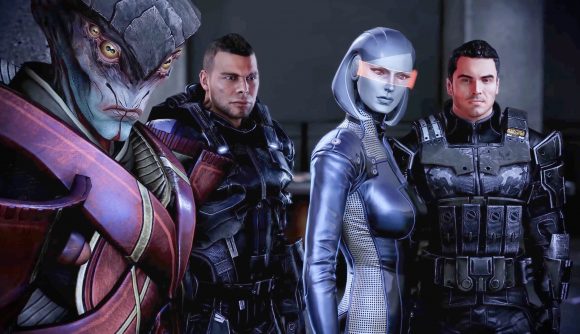 The newly released Mass Effect Legendary Edition may well be the best way to play the iconic sci fi RPG games, but players have run into some technical issues while adventuring with Shepard and the gang. A patch is out now that addresses some of the bugs, glitches, and performance drops that have cropped up since launch, which should reduce a few space headaches.

The 7 June Update includes some overall fixes, plus a few targeted at specific games in the remastered series. The patch resolves a few language issues and adds in some needed options – for instance, now you can select English for spoken dialogue independently from the language used for subtitles, and the bug that stopped English dialogue from playing during the Citadel DLC in Mass Effect 3’s German and Italian localisations has been fixed.

PC players who have non-standard characters in their operating system username should now be able to launch the game normally, and everyone should see better PC performance throughout, and specifically in chuggy areas like Virmire. EA and BioWare say they’ve also made some “minor calibrations and fixes” that should address a few notable crashes.

In Mass Effect, you’ll now be able to reach max level, and the tier VII Spectre – Master Gear should now be accessible. Male characters have improved eye animations, and the volume has gotten toned down in the Mass Relay loading screens.

The latest update for #MassEffect Legendary Edition is live.

In Mass Effect 2, Illium’s fog has had its intensity dialed back a bit, and BioWare has also added a 100,000 credit cap to the amount of currency that can be carried over from the first game “for more balanced early-game progression.”

Mass Effect 3, in addition to the language issue noted above, has gotten a fix for a bug that kept a few key characters from appearing in the Citadel DLC.