RPG games still struggle with handling race in a way that doesn’t encourage stereotypes. While genre titans like The Elder Scrolls and Baldur's Gate have embraced a diverse cast of characters from a variety of backgrounds, they often forget that people are not monoliths.

Mass Effect is no exception to this. Though it does a better job than a lot of its fantasy-based contemporaries in its character writing, it often treats its main characters as absolute representatives of their respective races rather than true individuals. This is essentialism: giving innate qualities to a race and having those qualities spill over to individual members of that race to define who they are, and it's an issue that needs to be addressed before Mass Effect 5.

Dungeons and Dragons is the original example of essentialism, as it established a character-building system that granted intrinsic bonuses and penalties to a character based on its race. But it goes deeper than that, right down to how a character of a specific race is generally supposed to think and act.

Mass Effect thankfully dodges one aspect of essentialism in that none of the talents you level up are racial except one, Krogan Battlemaster, which is partly justified as it’s also a professional specialisation. But the series still relies heavily on thematic essentialism, especially in the first game. 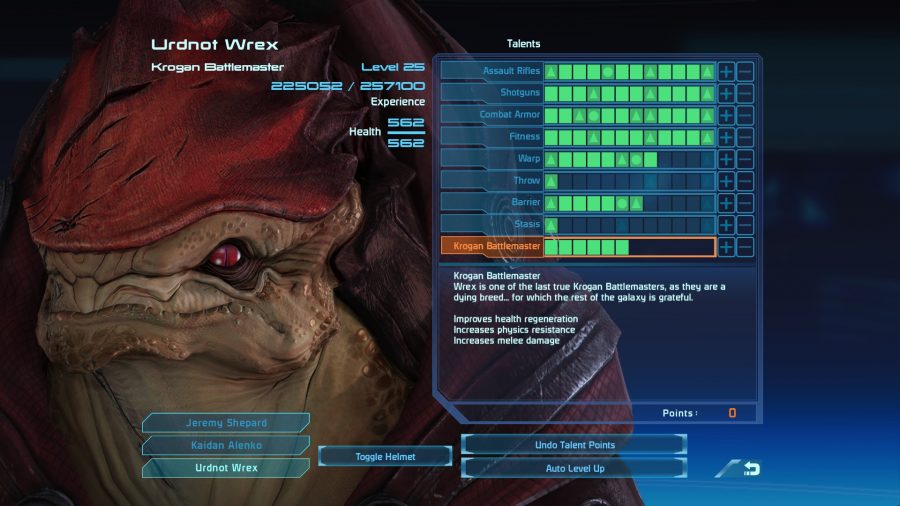 You control Commander Shepherd, a human Alliance officer tasked with tracking down a rogue agent and saving civilisation as you know it. Along the way, you get to select from six different allies for your team – two are human, but the rest are aliens of different races. And while each character is fleshed out and believable, they’re written with worldbuilding in mind. As the first Mass Effect is naturally our introduction to this fictional future universe, developer Bioware occasionally treats your party members as windows through which we can see and understand their respective races.

The problem with this approach is that it reduces these characters into living codex entries for what their respective races are like, letting their race’s stereotypes define them when they should be individuals. Asari have the ability to mind meld, so Liara is inherently empathetic. Krogan are rough mercenaries, so Wrex is too.

This kind of widespread essentialism has the effect of making most of the galaxy’s inhabitants racist to one another: they literally make assumptions, jokes, and judgements about others based on no information other than their race. Sometimes this is used with intent: when talking to Tali, a quarian, others will remark that her people are responsible for the threat posed by the geth, a machine race who were created to be the quarians’ servants, but gained sentience and rebelled against them. When this gets brought up to Tali, she’s often held personally responsible as if she had a hand in the act. 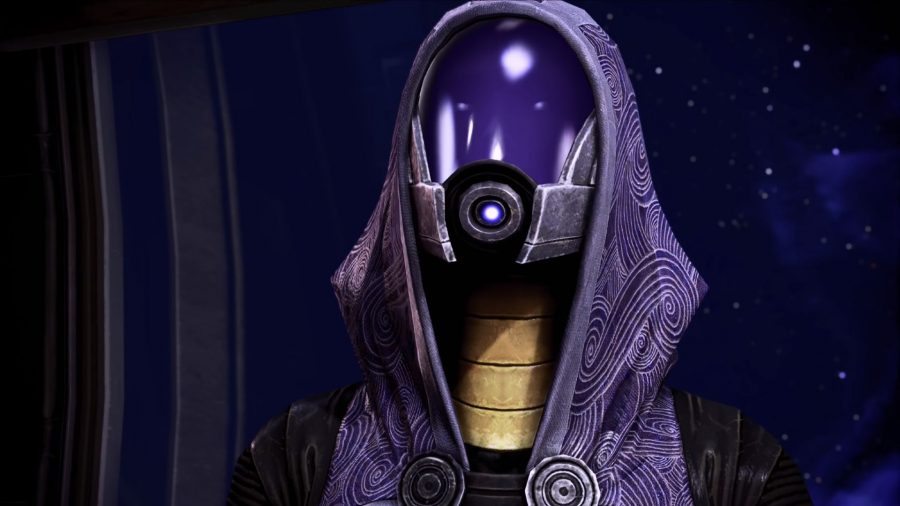 This works as a way to communicate the prejudice held by the galactic community against all quarians for their hand in the Geth incursion. But while Tali eventually confronts this racist and essentialist prejudice as part of her personal arc, her passivity in the face of such prejudice, and thus her tacit acceptance of it, is troubling in the first game. That’s especially true as, again, her attitude is used as a stand-in for that of her entire race: not only do the quarians seem to endorse the galaxy’s prejudice against them, it eventually drives them to attempt genocide against the geth, even after they’ve shown themselves to be capable of decency via Legion – itself another essentialist stand-in.

Compounding the problem is who gets to have nuance in the game. While most races have one representative in the first Mass Effect’s main cast, humanity gets three, including Shepard. Setting aside the semi-blank slate of the player character, you have Ashley, who holds a grudge against anyone not human for playing a role in tarnishing her family name, while Kaiden is more open, though still loyal to humanity with his own issues with the biotic powers he holds.

The other characters have backstories as well, but again, they’re more like living codex entries for their race, while non-human NPCs either have paper-thin characterisation or are played to stereotypes: Turians all have a hint of arrogance, Krogan are all battle-hardened mercenaries, and the list goes on. Humans get to be individuals because they’re centred in the game’s narrative. That’s a mistake that only invites more essentialism. 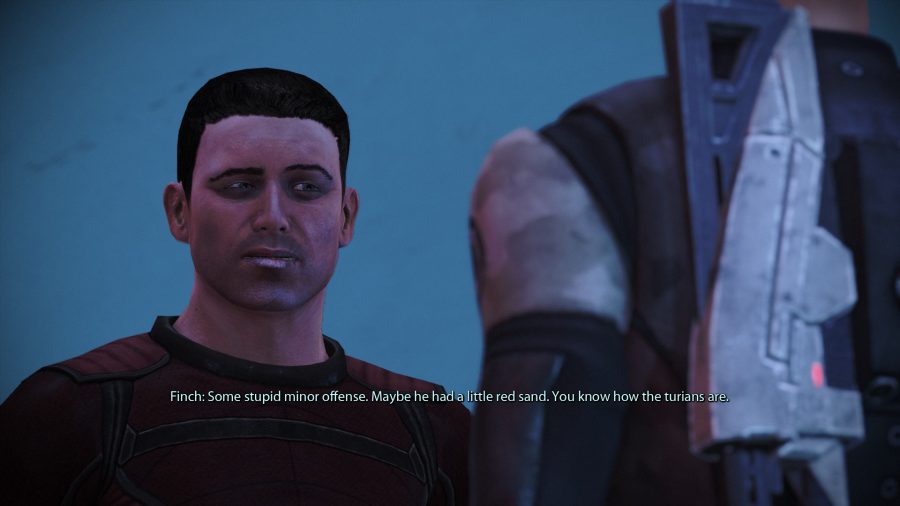 At best, the series is inconsistent in its awareness of the racist essentialist thinking of its own characters. Perhaps Bioware intended for the people on the Citadel to be racist to each other, but there’s very little pushback in-game to tell us that these people are being ignorant in their discrimination, rather than acting according to essentialist tropes which the game often presents as objective facts of the universe.

There’s a line in Mass Effect 2, during the Blue Rose of Illium assignment, where an Asari merchant describes her ex-boyfriend as “smart, especially for Krogan”. More damningly Wrex, himself a Krogan, sarcastically asks Shepard if they’ve ever heard of a Krogan scientist, hammering home the point that Krogan are inherently not smart by having a Krogan confirm it with his own mouth. When you get to know characters some individual traits shine through, but it’s usually when a character is talking about conflicts within their own race and how that individual reacted to them, reinforcing the stereotype while attempting to dispel it.

Elsewhere, stereotypes and tropes rule perceptions. When these attitudes are presented as mistaken, it feels anomalous in comparison to the many times when they are not. Humans are mostly spared this kind of treatment, but only because we’re seeing things from their point of view. 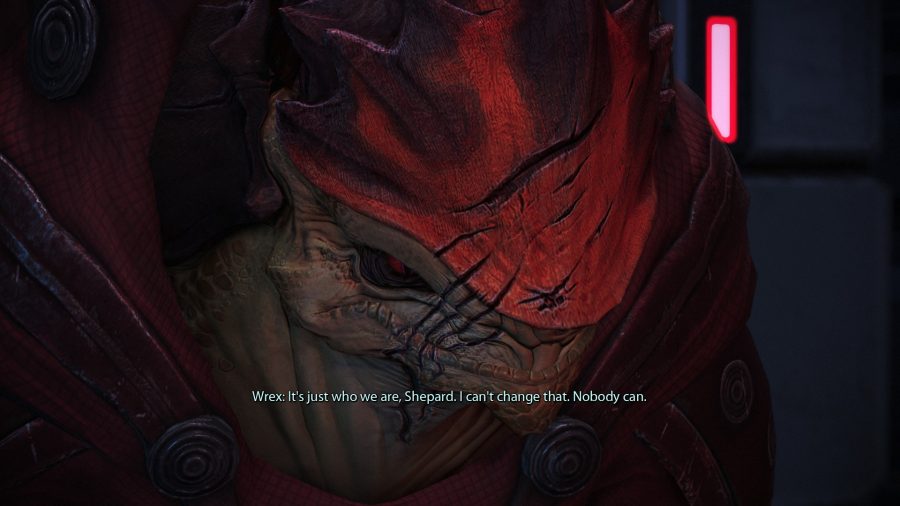 A major theme of Mass Effect is clearly the importance of interracial and intercultural tolerance, which is laudable, but to get this right by modern standards we need to see the series treat its other races with the same depth and nuance, and to recognise that they, like humanity, contain a plurality of individual perspectives.

Future Mass Effect games need to make clear that their characters are not defined by their race, that they’re individuals for whom their race and culture is just one part that informs a whole, complex entity. Instead of building stereotypes as whole identities, media needs to address the diverse cultures of the different races and acknowledge the role discrimination plays while pushing back against it. To do anything else is a disservice to the otherwise fascinating universe Bioware has built.

If you’re new to the series then you can cap off the trilogy by grabbing Mass Effect: Andromeda here. We also have heaps of guides for the trilogy, so if you’re looking for Mass Effect: Legendary Edition mods, the right mission order, or what romance options are available to you then we’ve got you covered.