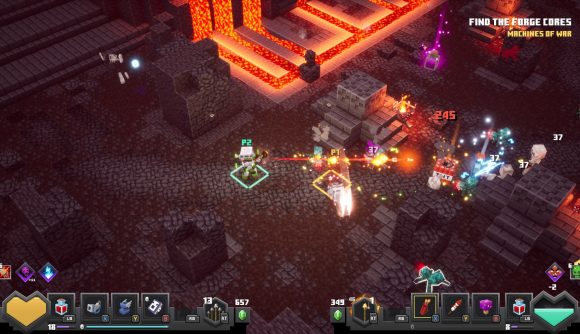 Minecraft Dungeons is out now, and it’s a decent little romp through a rather violent version of Minecraft’s blocky world. As with most things though, it’s better with friends – and for the time being, you’re limited to playing with friends who own it on the same platform you do. That may be changing in the future, though – developer Mojang Studios says it’s working to implement cross-platform play.

Minecraft Dungeons is available on the PC, Xbox One, PlayStation 5, and Nintendo Switch, but at launch, the online co-op is limited to friends playing on the same platforms. However, Pure Xbox unearthed a passage in the official FAQ that indicates cross-platform play is in the works.

For now, the site says you’ll have to purchase copies (or use Xbox Game Pass) on the same systems in order to play together.

The prospect of cross-platform support for Minecraft Dungeons is good news, but Mojang’s post doesn’t specify whether this will mean all platforms or just a selection of them. So we can’t know whether, say, you’ll be able to play on PC with a friend using a PlayStation and another with a Switch.

The most likely scenario would seem to be Xbox One-PC cross-play, particularly since Minecraft Dungeons is already included in the Xbox Game Pass for PC. But there’s no way to know until Mojang Studios gives the official word.