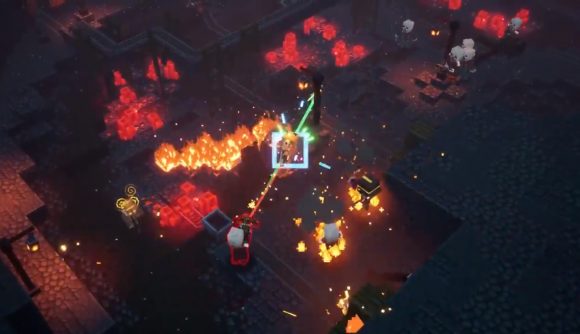 We’re getting closer and closer to the launch of Minecraft Dungeons, the Diablo-style Minecraft spinoff that focuses on action-packed crypt crawling over building and creating. A new clip of gameplay footage provides a brief peek at a character loadout and how it will work in practice.

You can check out the clip below. In it, you can see how the character paperdoll inventory system works – you simply grab a piece of equipment from your backpack and plunk it into one of three slots over your character. There’s one for melee, one for armour, and one for your ranged weapon. Down below, you have three more slots for various items or artifacts.

In the video, the player has an enchanted ax that’s imbued with fire, some unique fox armour (which adds +38 to health, a 30% chance to negate hits, and provides a buff that heals nearby allies when you quaff a health potion), and an elite power bow that’s firing arrows pulled from a flaming quiver. The fox armour, notably, has an enchantment – it leaves a trail of fire behind you.

Here’s the kit in action:

Burn them all! With the right combination of weapons, armour and enchantments, you’ve got everything you need to turn your enemies to toast. pic.twitter.com/F4X0u8es21

It’s a short clip, but you get a good sense of what’s going on in Minecraft Dungeons from it. It’s also a good showcase of the game’s visual appeal – it has a bit of a dreamier, more vibrant color scheme than the main game usually does, and there’s an attractive bloom on some of the lighting effects.

The player seems to be scorching through most of the enemies in the brief clip, and that may be due to the fact that Minecraft Dungeons isn’t afraid to give you ridiculously OP weapons.

Mojang plans to hold a closed beta for Minecraft Dungeons sometime soon, and the game itself is slated for release sometime this spring.