Creating your first Minecraft beacon? Or just looking into the possibility of how to craft this rare and valuable item. A beacon in Minecraft will set you back a pretty penny in resources and time and there are a ton of materials you’ll need to obtain which sadly won’t be as easy as sprinting around the world and mining a couple of blocks – no.

Crafting a Minecraft beacon is an incredibly lengthy process, but the rewards are certainly worth it. You’ll be granted status effects such as speed, jump boost, haste, regeneration, resistance, and strength to yourself and nearby players. When the beacon in Minecraft activates it will emit a beam of light into the sky which can be seen from far away, a flashy sign that you’re the new owner of this dazzling and sought after item.

Here’s everything you need to know about Minecraft beacons including the recipe to make them, how to get all of the items required to build a beacon, steps for setting them up, and the powers you can expect to wield once your beacon is up and running.

So, how do you craft a beacon in Minecraft? You’ll need the finest materials to craft your beacon, not any old blocks will do:

Once you have all these ingredients, place the Nether Star in the middle of the crafting grid, the glass either side of the Nether Star and on the top row, and the obsidian along the bottom row. 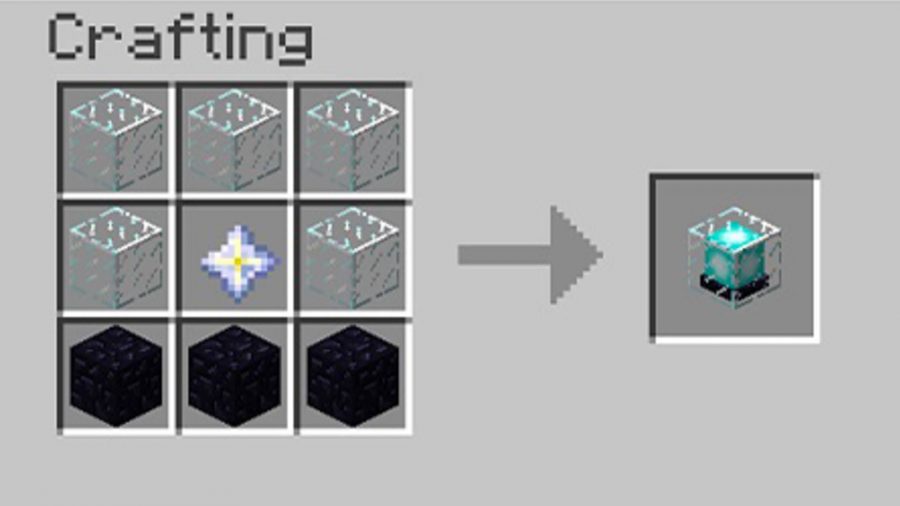 Glass is the least of your worries, you can usually find this in woodland mansions or create it by smelting sand in a Minecraft blast furnace. If you’re mining glass, be sure to use the silk touch enchantment using a Minecraft enchantment table – it’s fragile!

Obtaining the Nether Star in Minecraft

There’s only one way to get the Nether Star in Minecraft and it’s not easy. You’ll need to defeat Minecraft’s toughest boss, the wither, Luckily we’ve got a guide on how to spawn and kill the Minecraft wither and how to create a Nether portal in Minecraft to get everything you need.

There are a number of ways to obtain obsidian in Minecraft. It generates naturally on the surface of the End, as part of end ship in end cities, in woodland mansions containing a diamond block, or in some underwater ravines and caves.

If you need to create obsidian, it forms when spring water flows into lava and can be mined at layer ten or lower. You can also mine a Nether portal in the Nether or Overworld.

How to make a beacon glow in Minecraft

Now you’ve crafted your beacon, it’s not as obvious as planting your new luxury item on the ground and hoping for the best. Your Minecraft beacon is a lot more demanding than that, it is made from the remains of the most difficult boss in Minecraft, after all.

You’ll need to create a pyramid for your beacon to sit atop. This is the only way to activate your Minecraft beacon, and it’s /still/ not as simple as plonking down some blocks. There are different levels of pyramids and you’ll need to use either iron, gold, emerald, or diamond to create your pyramid, it doesn’t matter which you use, or how you place these blocks, unless you’re going for a certain aesthetic.

Pyramids can also be used for multiple beacons, but demand a larger pyramid radius consisting of more blocks and resources to accommodate their extraordinary power.

How do you go about selecting your beacon powers in Minecraft? Although you’ll have to reach certain levels to acquire Minecraft beacon powers, when you reach each level you’ll be able to select a power in the beacon’s GUI.

You’re worth it: Read our guide on using Minecraft diamonds

To select one of the primary powers you’ll have to feed your beacon either an iron ingot, gold ingot, emerald, or diamond to obtain the status effect. The five primary powers are:

If you reach pyramid level four, you can choose a secondary status effect, either regeneration or increasing the strength of your primary powers. Again, use the beacon GUI to do this.

That’s how you make your new beacon glow in Minecraft, be sure to take care of it, as if your pyramid takes damage, your beacon will no longer function and you’ll be left status-less. Although it’s an easy fix, just patch up your damaged blocks, you don’t want to risk the lights going out on your well earned work.