Planning on creating your own Minecraft wither? The Minecraft wither is the only player-made hostile mob in Minecraft, and like Frankestein’s monster, it will surely turn on it’s creator – so proceed with caution.

This floating undead boss mob hurls explosive skulls at enemies, but not right away. You’ve still got some time as your new deadly pet figures out it’s a creation and that its sole purpose in life is to fulfill its masters wish to kill everything it comes into contact with. Minecraft withers are hostile towards all mobs, apart from undead mobs such as zombies and skeletons. When you face a wither, the sky will darken and a purple health bar will appear, creating an eerie atmosphere for your boss battle and will stay this way until the fight is over.

These three-headed floating hostile mobs are pretty tough to beat, but if you’re brave enough to spawn one, then here’s how to deal with this powerful Minecraft mob and everything else you need to know about Minecraft wither effects, damage, and spawning.

How to spawn a wither in Minecraft

To spawn a wither in Minecraft, you’ll need all the right resources. Unlike other recipes using a Minecraft anvil or enchantment table, you’ll need to place the objects on the ground in a certain order, here’s how.

Place four blocks of soul sand into a T shape, with three blocks across and one block under the middle block. Then, place three wither skeleton skulls on top of the three upper blocks. The last block placed must be a wither skeleton skull, otherwise the spawn will be ineffective.

The wither will grow larger as the health bar fills up, but it won’t move or attack while it’s in this state, which lasts for ten seconds. After this state finishes, it creates a large explosion which deals up to 68 damage, so be sure to give it a wide berth when this happens to avoid taking unnecessary damage before the fight has even begun. Make sure you spawn the wither in an open area as you’ll need a lot of room to keep your distance as it starts to fling deadly exploding skulls your way. 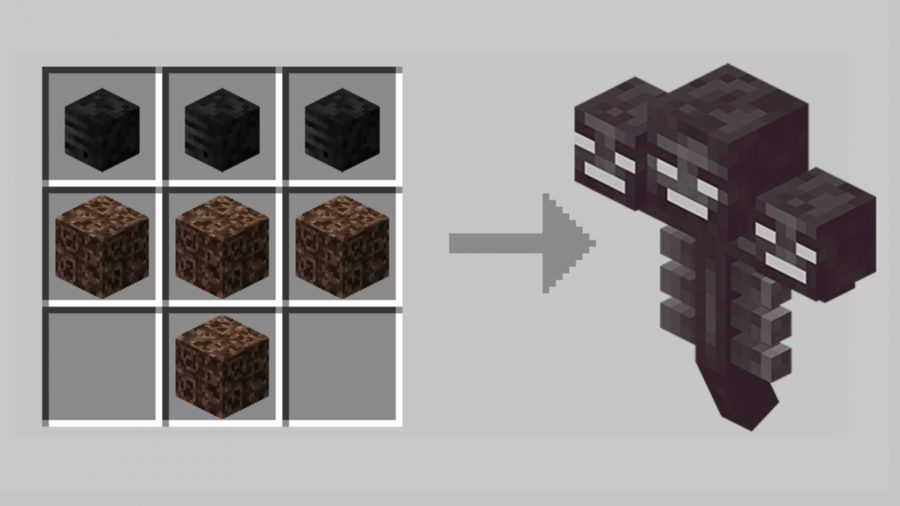 How do you get Minecraft wither skulls? Well, you’ll need wither skeleton skulls to spawn a wither in minecraft. These wither skeletons can be found in fortresses and The Nether and spawn with stone swords, in groups of one to five.

Related: Build a Minecraft Nether portal to get your hands on wither skulls

Among other drops such as bones, and coal, there’s a 2.5% chance that it will drop a wither skeleton skull when killed by a player or a tamed wolf and will always drop a skull if killed by a charged creeper.

How to kill a wither in Minecraft

A wither in Minecraft is immune to fire, lava, and drowning damage. Fortunately for us though it takes extra damage from weapons with the smite enchantment, so it’s worth using a Minecraft enchantment table for an extra boost on a Minecraft diamond sword.

Using a bow is always a good option, so you can keep your distance as a wither damages every block it touches – ouch. Make sure to enchant your bow with power and infinite and if you’re using a crossbow, the quick charge enchantment will ensure you don’t lag behind. Also make sure you stock up on plenty of bows, you don’t want to be caught short half way through the fight.

Although the wither is immune to most status effects, it is harmed by the instant health effect and healed by instant damage, unlike other undead mobs. Come armed with plenty of healing potions for health regeneration and strength potions to deal extra damage by using the Minecraft brewing process.

The wither will react differently depending on your difficulty setting, sometimes spawning wither skeletons at half health and doubling down on the amount of skulls it lobs your way. The wither will always become more aggressive when its health depletes below half way and has a habit of charging towards you, taking out everything in its path on its way. It will also gain armour at this point, letting you know it won’t go down without a fight.

When a wither attacks, it fires projectile exploding skulls, another reason to keep your distance. The wither shoots multiple skulls a second at a target, whether that be an innocent bystander or at you.

If you’re struck by a wither skull your health hearts will turn black and, similar to poison, your health will slowly drain. To cure this, drink milk or use a totem of the undying.

Related: Everything you need to know about the Minecraft Nether update

Once the battle is over you’ll get to reap the rewards of killing the Minecraft wither boss, so what does a wither in Minecraft drop? The Nether Star, that’s what. An extremely rare item that you can use to craft a Minecraft beacon that provides status effects to nearby players, as well as looking pretty fancy.

So that’s how you spawn and kill a Minecraft wither. Although you won’t find a challenge quite like this mob boss, our guide to a Minecraft phantom will aid you against this lesser evil.