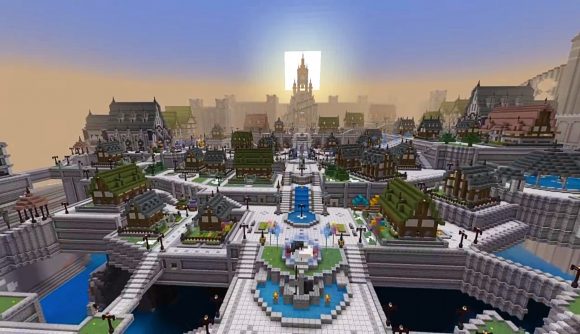 Minecraft will never leave you without a place to sleep and rest. One of the first things that players do is build themselves a little hut or hole in the ground to rest in, so it’s an integral part of the experience. Final Fantasy XIV, on the other hand, seems to run into some version of a housing crisis every few months. The latest one, for example, has been caused by a bug in the lottery system.

Well, one player has decided to build themselves an in-game version of the Empyreum for fun, and maybe that’s the best way to solve the housing issue? We’re not sure how long the whole thing took, but the player, who goes by FF14_Wedding on Twitter, built their own take of the area. It’s an impressive accomplishment even if you’re using the tools available on PC, but they’ve gone ahead and done it on PS4.

According to their tweets, they did this by taking photos of the area and then just meticulously recreating it by sight. While we’re quite fond of PC builds around these parts, there’s something inspiring about a player doing this with the base tools in the game, and it looks amazing in the video they put up. The city looks especially good at night, with the stars being an excellent fantasy backdrop for the area.

On PC you do still get builds that come from vanilla Minecraft, of course, like this incredible take on Carl and Ellie’s house from Up. There’s basically no end to the amazing Minecraft builds out there, and it’s always great to see players putting their love of other games into our favourite sandbox game.

Just in case you’re not up to date with both of these games, did you know that the FFXIV patch 6.1 buffed White Mages? Also, did you know the latest Minecraft snapshot buffed Wardens?