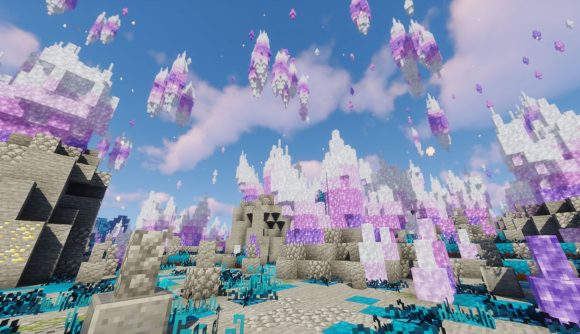 Hal’s Exploration mod is a big, fan-made Minecraft project in the works from creator HalbeargameZ, which is about a steampunky take on exploration, and will take players to “many dimensions which have unique abilities”. The mod’s been in the pipeline for a year or so, and it doesn’t look like its final launch will be for a good while yet, but the modder has just posted some exciting updates on how it’s coming along, so we’ve got a good idea of the upcoming mod’s tech.

First up, HalbeargameZ has posted a look at one of the upcoming Minecraft mod’s key bits of kit: a “steampunk steam engine!” That is, a power generator in a steampunky style, used to power all vehicles in the mod, which – along with some other machines – players will have to craft, as they’re how you’ll get to different places. That’s right – there won’t be any portals to use in the mod.

As you can see below, it’s a nifty-looking piece of kit, with a distinctly steampunky feel thanks to its cogs cranking away, and bursts of steam puffing out of its top. It was based on a real steam engine, the creator explains in the comments, and in-game does make little engine puffing sounds. It’s gone down well on Reddit so far, with more than 9,000 upvotes at the time of writing:

i animated a block for my mod! to specific i animated a steampunk steam engine! from Minecraft

Elsewhere, the modder has given us a glimpse of some of the other tech the mod will feature, including a generator, T1 computer, and transporter, which you can check out on Reddit here. And, there are some gorgeous snapshots of two of the mod project’s biomes which the modder has posted on Reddit, as you can see below:

There’s no news on exactly when you’ll be able to play the mod yourself just yet, though HalbeargameZ says that the first alpha of Hal’s Exploration mod should be out sometime in July, and that’ll bring two “base dimensions”. When complete, the full project should feature “space travel […], many bosses, tech, vehicles, and lush biomes”. Lovely stuff.

While you wait, be sure to check out our Minecraft maps, Minecraft servers, and Minecraft cities guides for some handy tips.