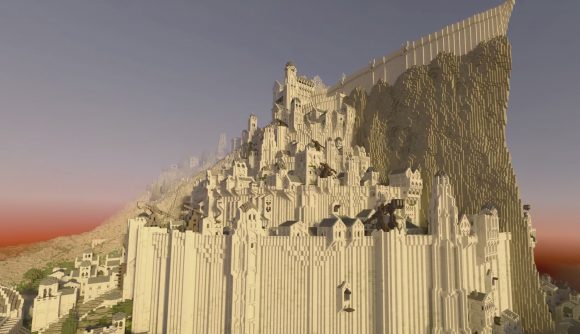 People have been building Lord of the Rings locations in Minecraft for about as long as the game has been around, but precious few have achieved results as impressive as Minecraft Middle-Earth’s rendition of Minas Tirith, the capital city of Gondor set on the eastern tip of the White Mountains. A new video from Nvidia showcases the build with RTX features on, and the ray traced lighting adds a whole new level of awe to this lovingly-crafted replica.

As you can see below, the global illumination is casting an early evening light against the city, with the white stone lit up in a pale gold. The ‘fog’ that obscures faraway blocks adds depth to the scene, making the crowning courtyard atop the high cliff look all the more impressive. As night falls, torchlight flickers in the city’s windows.

It’s truly an impressive sight to behold, and the ray traced lighting effects added into Minecraft with RTX genuinely enhance the scene. Minecraft Middle-Earth has been at this for almost 11 years now, and this new tech is the perfect way to make the group’s hard work shine.

You can find out more about Minecraft Middle-Earth at the official site. The group has featured prominently in our list of the best Minecraft builds for quite some time, and it’s no wonder – they’ve also done incredible builds of Pelargir, Isengard, the mines of Moria, and more.

Of course, you can always check out our list of the best building games on PC if you’re not keen on Minecraft specifically. If you need us, we’ll be up at the top of Minas Tirith singing that sad song “Edge of Night” that Pippin sings in The Return of the King.