The beta announcement trailer for Minecraft Earth, the augmented reality version of Minecraft headed to mobile devices, provided a host of information on the upcoming game. That included brand-new versions of classic Minecraft mobs, like a muddy pig. Now modders have taken the mobs shown in the Minecraft Earth videos and added them into the Java edition, using a bit of artistic license to create mechanics for them.

Modder Velvoxel Raptor’s Minecraft Earth mod for Minecraft adds in a few new mobs, associated items, and gameplay mechanics to Minecraft Java. What’s neat is that these creatures all have a transformation process, whereby the ‘normal’ versions can change into the mobs shown in Minecraft Earth trailers.

There’s the muddy pig, for instance – using the mod, you can make mud by putting dirt blocks into water blocks, and you’ll sink into it if you walk over it. The same is true of pigs, and if you lure one into a mud block, it’ll take damage until it dies, and then immediately respawn as a muddy pig, complete with a flower perched on its head.

Here’s a video by Logdotzip that breaks down all the new mobs and mechanics. 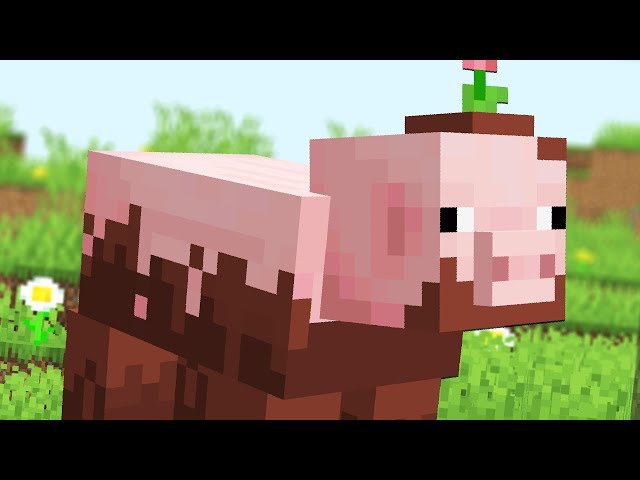 I’m particularly taken with the Cluckshroom, which you can create by feeding red mushrooms to chickens (note: don’t do this in real life). They have gangly legs and dorky overbites, and when killed, they drop two new items: red feathers and mystery mushrooms. Throwing red feathers at other mobs adds a random status effect to the mob, while eating the mystery mushroom does the same thing to you.

There are more details in the video, plus some additional information collected over on the Minecraft subreddit. You can download the mod here. We’ll have to wait a bit to get our hands on Minecraft Earth, but this ought to be fun in the meantime.