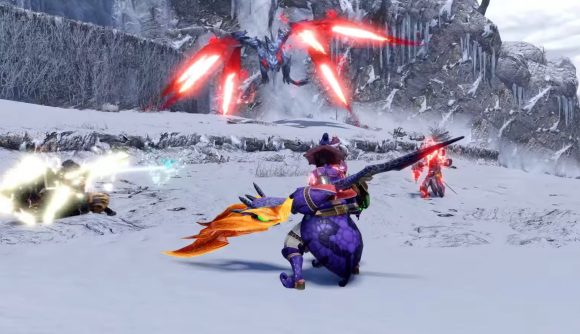 It’s just been a couple short weeks since the announcement of Monster Hunter Rise’s Steam release date, which is scheduled for early January. Fans who have already played the Switch edition of Rise will have to start fresh if they want to play on PC, though – Capcom has announced that cross-play and cross-save will not be available between Switch and PC, unfortunately.

In a tweet, Capcom says it has heard fans’ requests for cross-play and cross-save for both Monster Hunter Rise and its forthcoming expansion, Sunbreak. However, the company says “we found we are unable to implement it this time” after “looking into it throughout the development process”.

That’s a shame, because like other Monster Hunter games, Rise is a time-intensive experience, and players who have been hard into the gear grind on Switch will have to start all over again if they want to enjoy the fresh features coming with its Steam edition. Those include higher framerates, high-res textures, and 4K and ultrawide monitor support. It’s also going to feature easy-to-use voice chat and optimised keyboard/mouse controls.

Of course, it also means PC players won’t be able to join in hunts with Switch players, since you’ll be platform-locked to whichever machine you’re playing on.

We’ve heard your requests for Cross-Save / Cross-Play for #MHRise & #Sunbreak, but unfortunately, after looking into it throughout the development process, we found we are unable to implement it this time. As always, we appreciate your continued feedback and support.

The wording of the tweet leaves room for a glimmer of cross-play hope, though. Capcom says it wasn’t able to implement the feature “this time” – perhaps that means they’ll be ready to do it in the next Monster Hunter game.

The demo for the Steam edition of Monster Hunter Rise arrives October 13, though, so you’ll be able to dive in and see what it’s all about in a couple days.