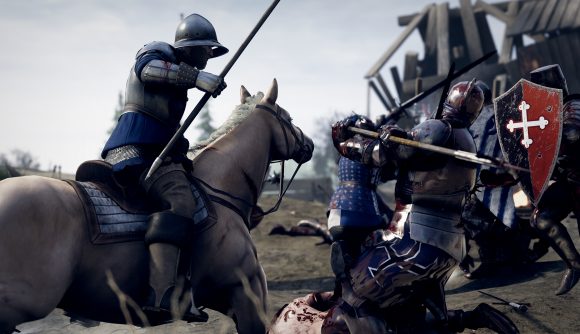 Mordhau, the medieval combat simulator that lets you play Despacito as your friends sever each others’ limbs, has had a very strong first month. The game has now sold one million copies on Steam, and to celebrate, the developers have added mortars.

They’ve added other things as well, including a brand new map called Crossroads, which is a single objective map that will constantly draw every swingin’ axe straight to the fight. There are also the new mortars, which I suspect will always be aimed directly at the center of that objective.

There are other new bits and bobs arriving in the game as well. For the spear fans, there’s the new javelin – a short, three-point spear that’s dedicated for throwing. You get two of them if you include it in your loadout, so you’ll want to take a moment to yank it out of whoever you hurled it into before moving along.

The other new weapon is the heavy hand axe, which is basically a massive murder-hatchet. The nice thing with this is that by switching your grip, you flip the axe around so you can use the clever repair hammer located on the back of the head.

The mortar is not explained in the new set of patch notes, but it is a mortar. That means you drop nasty things in the top, and they come out very quickly, hopefully landing on people you don’t like.

Hit them with the pointy end: Our pro tips for Mordhau

There’s another line in the patch notes that simply says “Added carrot.” I don’t know what that means, but carrots are nutritious and perhaps you’ll be able to give them to your teammates if they’re feeling a bit ennervated after a few decapitations.

If you haven’t tried it, Mordhau is good fun, and despite some inherent goofiness there’s a remarkably high skill ceiling if you’re inclined to study the blade.