It’s a well-established fact that too many games are compared to Dark Souls, but there’s no escaping it with Mortal Shell. Developer Cold Symmetry explicitly invites the analogy, and it may be the first time I’ve encountered a game that doesn’t come off the worse for it. After playing a couple hours of a preview build of Mortal Shell, I’ve come away with the impression that this is a game that understands what Dark Souls is really all about, and why the series has become so revered.

‘Souls-like’ is an increasingly ambiguous term that indicates the presence of some number of Dark Souls mechanics in a game. It’s now a tag on Steam that’s been applied to hundreds of games, all with some mix of challenging melee combat, enemies that respawn when you die, limited health regeneration, and a dark gothic aesthetic. To be sure, Mortal Shell uses all these elements, but for once the whole feels worth noticeably more than the sum of its parts.

For anyone concerned about spoilers, fear not: the preview build blocks off almost all story elements, containing only a few scant narrative wisps that hint at the larger picture. What I can deduce isn’t much beyond what we’ve already seen in the trailer revealed at the PC Gaming Show: you’re a strange and fragile being capable of inhabiting the ‘shells’ of powerful warriors who have come before, but you’ll have to seek out their names before you can truly unlock their full potential.

That’s the setup as I venture into the gloomy swamp of Fallgrim for the first time. Mortal Shell does take a lot of visual inspiration from Dark Souls, but even in the soggy mud of the opening area I’m impressed by how fantastic it looks. Just ahead, two dour-looking men sit by a campfire, and I approach. One is playing a haunting tune on a lute. Are these friends?

No, I realise belatedly as my foot triggers a bear trap. The pair of unpleasant yokels lay a beating on me and I’m knocked out of my mysterious knight’s shell, briefly pausing the action around me. It’s a great effect: suddenly, everyone turns to stone, and my physical being is decoupled with that of the knight, stretching my form as I tumble backwards and away from the shell, and leaving ghostly tendrils briefly frozen in midair connecting us. 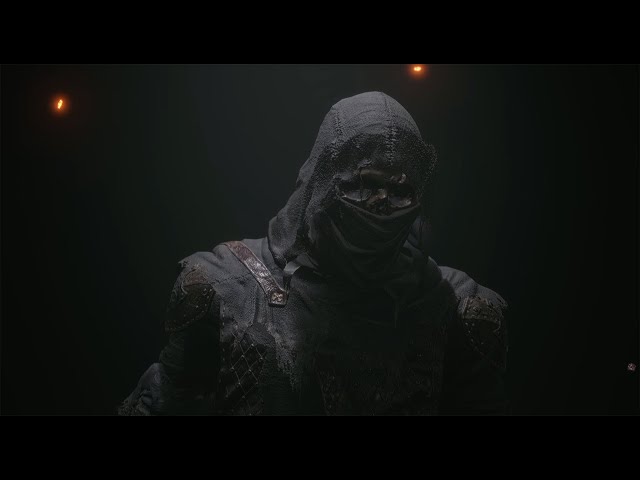 I hit the ground, but it’s not over: Mortal Shell gives you a second chance – if I can return to my body and re-possess it, I’ll be able to continue on my journey with a refreshed life meter.

That’s not the case this first time through, since the thugs quickly realise there’s someone else standing around, and murder me while I’m trying to get a bearing on things. When I reawaken, I’m back where I started, and I set out for the camp once again. This time I know what’s coming, and the two campers are dispatched without difficulty. After the fight, I pick up the abandoned lute.

It isn’t until a while later, after a couple more combat encounters that teach me about new hazards to look out for, that I think of the lute again. Flipping to it in my quick items bar, I activate it to see what it does. My character sits down in the puddle I’m standing in and inexpertly plucks out a tune, and a little diamond fills in underneath the lute’s inventory icon. Each time I use it, another of these is filled in, and the tune I’m playing gradually evolves from clumsy strums to a haunting melody.

All items in Mortal Shell work like this, as it turns out. There’s the barest lore snippet to read when you pick up something new, but you’ll have to actually use something to figure out what it does. I’ve found that some mushrooms heal, while others are poisonous. Items reveal more about themselves the more you use them, which is a compelling way to encourage experimentation.

Of course, Souls fans are familiar with learning through repetition, and Mortal Shell takes this approach to its combat encounters. In an early area in the swamp, two large halberd-toting guards block my path. By the time I reach them I already know that taking on more than one of these guys at a time is suicidal, so they’ll have to be picked off one by one. But there are other factors at play: two crossbowmen stand watch on a nearby ridge, and other enemies lurk around blind corners. Unknotting this little puzzle is a satisfying exercise as I work out the sequence of fights that works best for me.

Once I’m through the swamp, I find myself at the entrance to a dank catacomb. Here I discover the second shell – this one a lighter, more agile character than the knight. While fragile, this roguish character has high stamina and a dodge that allows me to move as a shadow around my opponents. There are plenty of these in the catacombs: eyeless fiends like the cave monsters from The Descent, and ambling men whose bodies are run through with swords, which they pull out of their torsos to hurl at me.

In high spirits: The best games like Dark Souls

After playing dozens of Souls-like games over the past several years, I went into Mortal Shell fairly skeptical. Too many games attempt to capture the magic of Souls simply by aping its mechanical systems or by employing the occasional cruel prank that wipes out forward progress. Mortal Shell is uncompromising but not unfair, and while its combat demands your full attention, it isn’t pointlessly difficult.

Instead, it manages to balance out a brilliant tension between drawing you forward into a beguiling world and filling you with a healthy sense of dread over what might be lurking around the next corner. It may in fact be the Dark Souls of Souls-likes, and I can’t wait to see more.

Mortal Shell will be available later this year on the Epic Games Store, with a Steam release to follow in 2021.