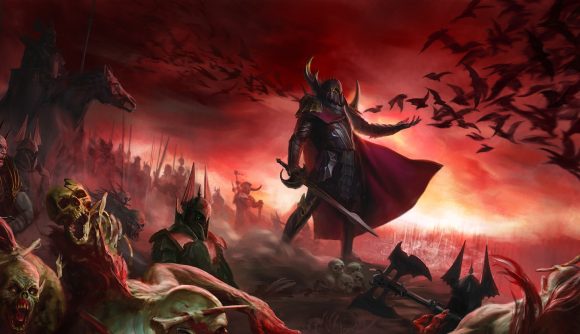 There aren’t really any other games that evince the feeling of commanding a medieval army the way Mount & Blade II: Bannerlord does, and thanks to a team of dedicated modders, soon you’ll be able to try that out as a leader in Warhammer Fantasy’s Old World setting. The Old Realms is a total conversion mod for Bannerlord that adds completely new factions, art, weapons, rules, maps, and more to TaleWorlds’ medieval game.

The Old Realms mod team has thus far released an early beta of the mod, which is somewhat unstable but includes the Empire of Man and the Vampire Counts factions. The modders have created loads of new assets for Bannerlord, with detailed units like Cairn Wraiths and necromancers. There’s magic, too – area-of-effect spells and summoning rituals can be performed on the battlefield, depending on your chosen character and faction.

Eventually, the team hopes to completely transform Calradia into Warhammer Fantasy’s Old World, and the proposed map stretches from the forests outside Flensburg in the west to Castle Drakenhof in the east.

Dwarfs and orcs should be the next factions available during “Stage 1” of development. In Stage 2, the modders plan to add in Chaos, Norsca, and Kislev.

If you want to try it out for yourself, or just follow along with the mod’s development, head over to ModDB and download the beta. You’ll need the latest version of Harmony in order to install The Old Realms, so be sure to snag that over on Nexus Mods first.

Our guide to Mount & Blade II: Bannerlords mods will give you some pointers if you’re looking for other things to customise in the game.