Nvidia is reportedly set to release a new graphics card in Q2, at least according to recent information gleaned from its board partners that is. With none of us really expecting Jen-Hsun to go ahead and pull the trigger on the next generation of graphics card, whether Nvidia Ampere or Hopper, what could the green team be looking to launch this early into 2020?

Nvidia would never admit to following the competition, but what if it decided to pull a Radeon VII at GDC or the Graphics Technology Conference in March? No, I’m not talking about releasing a brand new high-end GPU for a pretty penny and rendering it utterly obsolete in less than six months… I’m talking about a limited run 7nm Turing card.

Everyone loves a new graphics card launch. Well, apart from maybe reviewers given a scant few days of testing and a game-changing vBIOS update at the end of it all. But, them aside, everyone loves a new graphics card launch, and a high-end Nvidia one arguably most of all. I mean, it’s been a long while since we’ve had a high-end AMD one for comparison – though there is always Big Navi around Computex…

The speculation about a new Nvidia graphics card coming in Q2 has come from perennial leaker, Videocardz. A tweet dishing the deets given to it by ‘board partners’ claiming that Nvidia will launch a new GPU in Q2 this year, along with an AMD Big Navi release around Computex.

While a single tweet from unnamed sources doesn’t exactly inspire unconditional trust, Videocardz does have a certain level of insider access in the industry. I’ve been in closed door briefings and come out at the coffee break to find company PRs stressing about images posted on the site from within the room we’ve just left. Someone on the inside is leaking this stuff to Videocardz for sure.

We were told NVIDIA will launch a new GPU in the second quarter.
AMD is also expected to have Big Navi around Computex.

Info from board partners.

The juxtaposition of these two nuggets of graphics rumour-gold in a single tweet is telling, because I doubt one would be happening without the other. The fact that AMD is going to be launching a high-end version of its Navi GPU architecture this year means that Nvidia likely is going to face some competition at the top of the Turing tech tree. Indeed, all the rumours about the Navi 21 so far have the card challenging the RTX 2080 Ti in gaming performance terms with AMD making a concerted play for the best graphics card tag.

If the new Navi RDNA GPU can get close to the 2080 Ti then AMD will pull out all the stops to make sure that it can beat it, at least in a selection of benchmarks anyways. And there’s a good chance it might come in cheaper too…

And given the way the two graphics giants have been acting and reacting to each other recently it wouldn’t be unprecedented to see Nvidia aiming to spoil arguably the biggest Radeon card launch in a long time. Shifting the high performance GPU goal posts ahead of the Big Navi launch would be a good way to do that, and negating AMD’s one technical advantage – the advanced 7nm node – wouldn’t be the worst narrative choice either. 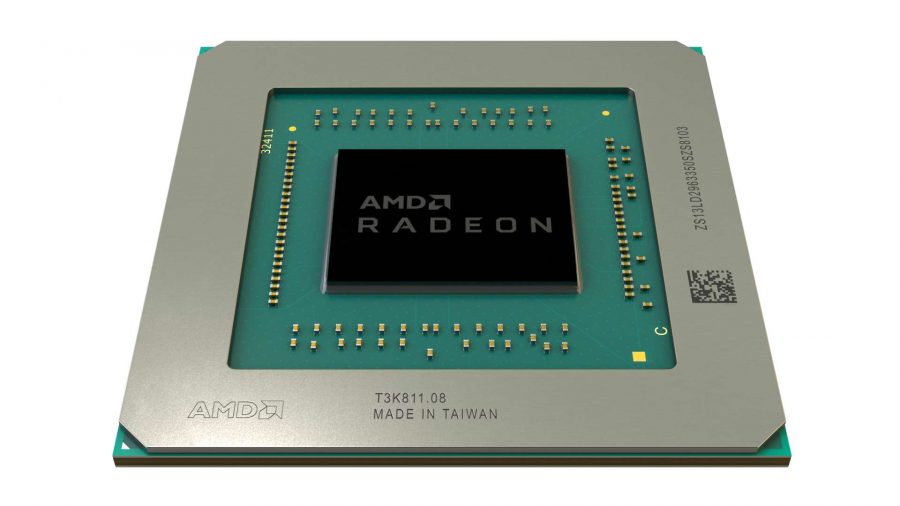 Now, I’m not saying there have been any leaks or rumours from Twitter accounts with anime thumbnails supporting this speculation, I’m just trying to think through what Nvidia could launch, with board partners, as a new Q2 GPU.

The obvious answer would be a new professional-level graphics card based on the next generation of Nvidia GPU architecture, maybe a new Titan RTX Ampere. Or Titan RTX Hopper. Whatever. But why would that information be imparted to Nvidia board partners? Team green ship the Titans itself with no AIBs getting close to releasing ones with their own coolers and colours attached.

So, while we’re expecting Jen-Hsun to wax lyrical about a new graphics architecture at the GTC event in March, I don’t think Nvidia’s Q2 GPU is going to be a professional next-gen Ampere/Hopper card.

But again I don’t think Nvidia would want to start things off that early – if the Big Navi was way ahead of the RTX 2080 Ti then it’s a possibility, but the early reports suggest the performance delta is relatively close. 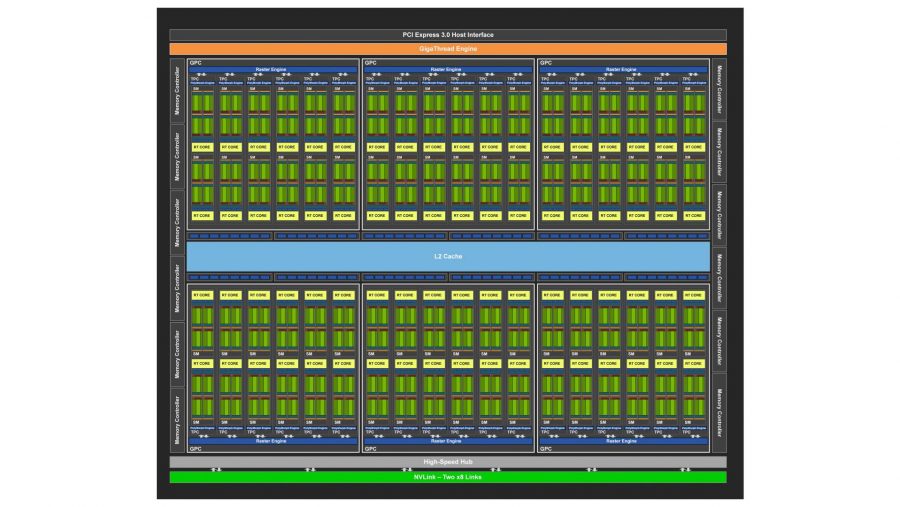 There have regularly been rumours of an RTX 2080 Ti Super card launching to complete a full suite of Super cards across the Nvidia stack. Jam the Titan RTX’s full TU102 GPU into a consumer-facing card and you’ve got a tasty upgrade to the top gaming Turing, which you can sell at the same already-high price and potentially spoil the Big Navi release.

That’s probably the easiest card for Nvidia to ship in Q2, and needs nothing more than to drop some full-fat TU102 GPUs into the same RTX 2080 Ti PCBs, then slap a new shiny shroud on top with the super-green Super lettering.

Personally I think the super-sexy, two-fingers up to AMD Q2 GPU would be a limited release high-end card. One that still uses the Turing GPU architecture, but is built from an advanced 7nm lithography. We know Nvidia is still looking to use TSMC for the bulk of its future 7nm production, but what if that small number of Samsung orders is for a 7nm Turing card? An RTX 2100 Ti? An RTX 2090 Ti? An RTX One? An RTX GeForce VII?

The increased performance and efficiency of switching from the 12nm design (which is still more or less the same as the 14nm and 16nm process) of the existing Turing GPUs to either TSMC or Samsung’s 7nm lithography would give the Turing architecture a bit of a leg up. That could also potentially push it beyond what Nvidia’s similarly 7nm Big Navi will offer. 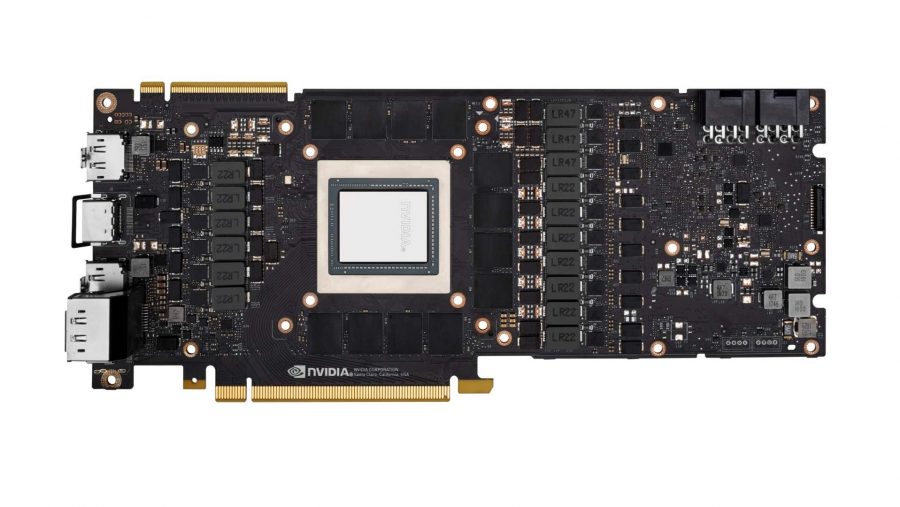 The issue is that 7nm supply is tight. AMD has admitted as much in its recent earnings report, and TSMC is already getting inundated with manufacturing requests, and has pushed out its lead times accordingly. A reactionary 7nm Nvidia GPU would be a tricky thing to squeeze out of the Taiwanese foundry unless Nvidia had it planned in a long while ago.

What of Samsung? There have been reports that Samsung’s 7nm yields have proved a little lower than it hoped, which might mean trouble for its contract manufacturing arm, and make it tricky to rely on getting the sorts of chunky chips that a high-end GPU represents. Though Samsung has denied this, even going so far as to reportedly place the blame for such rumours at the doors of foundry rival TSMC.

In the end only Jen-Hsun knows exactly what’s going down with its Q2 GPU. Maybe there isn’t going to be one at all, and there’s a good chance we won’t see anything GeForce-related until September at the earliest. But my personal favourite option if it does come to pass would be a consumer-facing 7nm Turing card getting dropped at the same price as the RTX 2080 Ti, but y’know, with a funky new name.