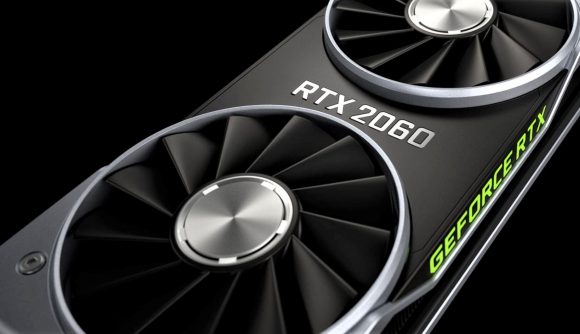 Word of an Nvidia RTX 3000 series second-wind has dominated the graphics card grapevine for a while now, and the RTX 4070, RTX 4080, and RTX 4090 could be with us in 2022. Yet, before any of that, a new leak suggests the rumoured RTX 2060 refresh could arrive early next month.

Spotted by Overlocking, the now-deleted Bilibili post says a revitalised RTX 2060 could arrive on December 7. According to previous reports, the new GPU will come with a 12GB GDDR6 memory bump, while retaining its original PG161 board and TU106 silicon. Information relayed by the reliable leaker Momomo_us also suggests that standard and overclocked versions of the card by Gigabyte and Windforce could be on the way.

While the original RTX 2060 comes close to the performance of an RTX 3050, the new SKU’s VRAM increase could enable it to play modern games at respectable resolutions, especially with tools like Nvidia DLSS enabled. Naturally, the prospect of overclocking also means the card could potentially hold its own against the RTX 3060, but as always, benchmarking could tell a different story.

It’s needless to say that until Nvidia officially reveals the new RTX 2060 graphics card, you should take news of its arrival with a grain of salt. Even if the GPU does arrive next month, the GPU’s availability could still be affected by ongoing component shortages. That said, RTX 3000 and AMD Radeon cards are going for double their MSRP, so perhaps the refreshed Turning GPU will prove to be an affordable alternative.