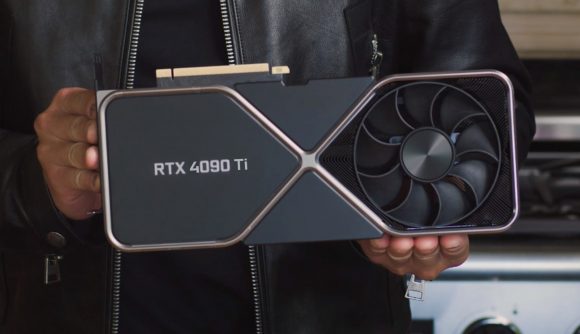 An Nvidia RTX 4090 Ti graphics card could be on the way, and it might guzzle more power than its rumoured RTX 4000 series counterparts. According to reliable leaker Kopite7Kimi, the green team is considering a souped up variant of the RTX 4090 that uses two 16-pin connectors and a “full fat” version of the AD102 chip.

In terms of specs, the Nvidia RTX 4090 Ti is rumoured to pack 48GB of GDDR6X VRAM, doubling the suspected figure of the vanilla RTX 4090. As you’d perhaps expect, the green team’s best graphics card is seemingly ravenous when it comes to power, as it’s supposedly designed to slurp up 900W. In other words, upgrading to the rumoured flagship GPU means you’ll likely also need to look into picking up the best power supply possible.

Kopite7Kimi also rocks the boat when it comes to RTX 4080 and RTX 4070 GPUs, as its upcoming graphics card contenders will allegedly use respective AD103 and AD104 chips. Spec leaks previously suggested that these SKUs belonged to the RTX 4060 and RTX 4070, with higher-end options utilising the flagship AD102 die.

Before you get too excited at the prospect of an RTX 4090 Ti, Kopite7Kimi clarifies that “no one knows whether it will become an actual product.” Therefore, you should ingest the insider’s info with a grain of salt for now.

In fact, there is another full-fat AD102 SKU with 900W TGP, 48G 24Gbps GDDR6X, 2*16pin and higher frequency.
But no one knows whether it will become an actual product. Because the test board of AD102 has more than two 16pin connectors, so everything is possible.

Even if the next-gen flagship is on the cards, it’ll likely show up after the main RTX 4000 series release date, meaning AMD RDNA 3 GPUs could beat it to the chase.