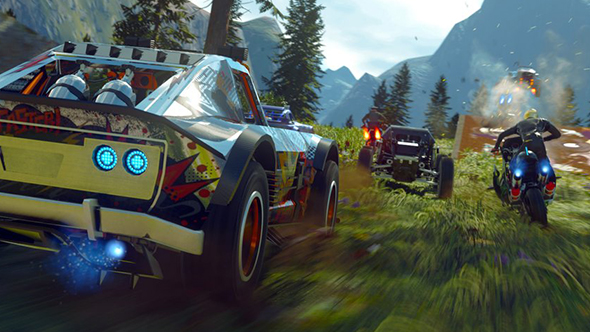 The racing specialists at Codemasters are going fully arcade-style with their upcoming racer Onrush, and in case you missed it, yes – the game will eventually hit PC. That version will come an unspecified amount of time after the console release on June 5, but in the meantime you can enjoy a flashy trailer showcasing a stampede of colorful vehicles driving very fast.

Make the wait more bearable with the best racing games on PC.

If the combination of cars, trucks, buggies, and motorcycles careening through an off-road track looks familiar, that might be because the team behind the game is made of former Evolution Studios members, who previously brought the PlayStation-exclusive MotorStorm games to life.

Onrush is built around takedowns and stunts that fill up the Rush meter, allowing you to “unleash the ultimate manifestation of boost and power.” Each of the eight vehicle classes have their own strengths and weaknesses, as well as their own abilities in Rush mode.

Codemasters tweeted that a PC version of the game was in the works back at the time of their original announcement, and the official FAQ says the game “will be blasting its way onto PC at a later date. We’ll keep you all updated with more information in the near future!”

Original story October 30, 2017:Onrush is a ridiculously colorful arcade racer from Codemasters featuring a variety of vehicles competing in action both on and off-road. That all sounds great, but for one significant detail: unlike every other Codemasters racer in recent memory, this one won’t be coming to PC.

Why? We don’t know, but we have reached out to Codemasters for comment. The studio behind Onrush is made up of former Evolution Studios developers – if the hybrid off-road action sounds familiar, that’s because these are also the MotorStorm people. Onrush will be their first non-PlayStation exclusive, but while the game’s coming to Xbox it apparently won’t be moving beyond consoles.

That’s a shame given both the MotorStorm pedigree and Codemasters’ history on PC, and hopefully the platform plans will change by the time of the game’s summer 2018 release date.

But for now, you’ll have to enjoy the rush on consoles, or check out one of Codemasters’ myriad other breakneck games, whether that be the likes of Dirt 4 or Dirt Rally, or even something more sim-y like the latest F1 title. Not quite the same as a boost-powered rocket racer, but we’ll have to make due.