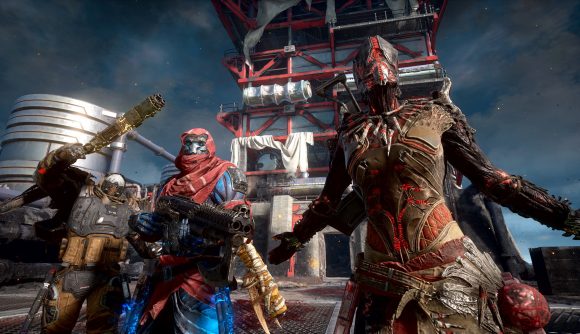 Outriders is on the way to Xbox Game Pass for PC, scheduled to hit the subscription service October 19. That’s good news for everyone still playing People Can Fly’s loot-shooter on Steam, since a patch that dropped today for the Steam edition of the co-op game enables cross-play with the Microsoft Store version.

If you’ve been playing Outriders on Steam, there’s a 4.8 GB patch to download, updating the game to allow cross-play with the Microsoft Store version and correcting issues with two mods. Specifically, the Grand Opening and Scrap Grenade mods had a bug that resulted in the mods triggering with every shot, which was not their intended behaviour. That’s been fixed, but the more consequential change will certainly be adding Game Pass players to the Outriders player pool.

People Can Fly says it’s working on bringing the Stadia edition in line with the version of Outriders found on other platforms, and plan to enable cross-play between Stadia players and everyone else in Outriders along with the November update. So before long, everyone in Outriders will be able to jump into co-op with everyone else.

We are hoping to also update Stadia in the very near future.

This update would bring Stadia in line with all other platforms. We are still improving the Stadia crossplay experience so crossplay between Stadia and other platforms will only go live with our November update.

Outriders has gotten patches on a roughly monthly schedule lately, with improvements to inventory management, buffs for all classes, and some special tweaks for the Devastator headlining some of the recent updates.