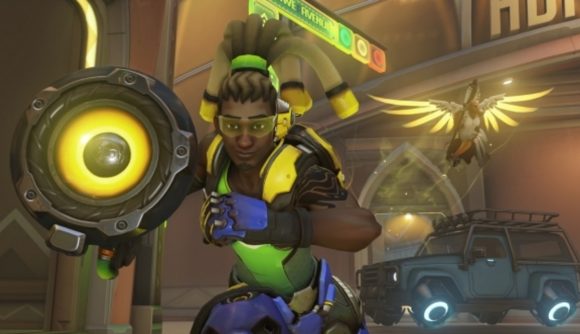 Overwatch 2 will be unveiled at BlizzCon next weekend according to new reporting by ESPN. The game will feature new game modes, maps, and PvE elements, and players will have a chance to try it out for the first time at Blizzard’s annual convention in Anaheim, which kicks off Friday.

ESPN has spoken with sources at Blizzard and obtained documents that provide some new details about the upcoming sequel to Overwatch. A new version of the Overwatch logo adds a stylized numeral ‘2’ in an orange element to the side of the established OW circle, and new key art displays it next to a smiling Lucio.

The documents indicate that Overwatch 2 will add new hero talents and consumables to the Overwatch formula, and will include a new PvE missions. One of these is apparently a four-player story mission set in Rio de Janeiro, and ESPN’s sources say a significant portion of the game will be centered on narrative.

Another new addition is a new game mode called Push, which documents say will debut with a new map set in Toronto.

Blizzard has had a rough time of it this past year, going from the poorly-received announcement of Diablo Immortal at last year’s BlizzCon to the announcement the company was laying off more than 200 employees as part of a cost-cutting effort by parent Activision-Blizzard.

new from me for ESPN:

Sources: Blizzard will unveil the next iteration of Overwatch at BlizzCon, Overwatch 2, which will feature PvE, new maps, new game modes, and a new hero among other updates @ESPN_Esports https://t.co/nbq72oM8nU pic.twitter.com/ooKqLhPy36

A string of high-profile departures followed in the wake of that news, and lately the company has been weathering a barrage of criticism over its handling of Hearthstone pro Ng ‘Blitzchung’ Wai Chung, who spoke out in defence of anti-government protests in Hong Kong at a recent tournament.

This year’s BlizzCon could be a chance for Blizzard to try to right the ship, and it looks like it’ll be highlighted with big-ticket announcements. In addition to Overwatch 2, a magazine ad that ran in Germany last week strongly indicated Blizzard will be formally announcing Diablo 4 at the convention.