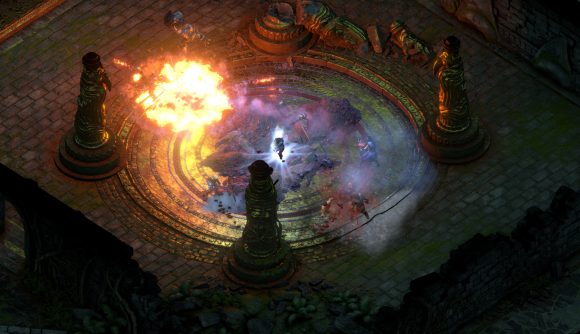 Eurogamer highlights a Tumblr post by Josh Sawyer, who directed Pillars of Eternity I and II, as well as the beloved Fallout: New Vegas. In the post, Sawyer explains that Deadfire’s lukewarm commercial performance is an indicator that something would have to change if a Pillars III was ever to happen.

“[I]f we consider making another Pillars game in this style, we’re going to have to re-examine the entire format of the game,” Sawyer writes. He goes on to point out some possible reasons for Deadfire’s disappointing sales: “Is it because the first game satisfied the existing need and the audience just wasn’t interested in the second? Is it because awareness was lower for the sequel? Is it because despite the strong reviews and the strong sales for the first game, people didn’t ‘really’ like it?”

Sawyer says it could be any of those factors, or some combination – but the problem is, at this point Obsidian hasn’t identified the problem. The strong reviews he mentions, though, include our own Deadfire review – we gave it a 9/10, with our reviewer waxing lyrical about his time spent on Deadfire’s high seas and tropical islands.

So naturally it’s disappointing to hear that the game was a bit of a flop as far as Obsidian is concerned.

“It would be easier in some ways if Deadfire were also a colossal critical failure and we could point to the massive screw-ups that we needed to address,” Sawyer writes. “I couldn’t give our (Obsidian’s) audience the game that they wanted, and without understanding where I went wrong, I would be guessing at what the problems are and how to remedy them.”

It’s not all bad news for Obsidian, however. Since the launch of Deadfire, Obsidian has joined Microsoft Studios (along with fellow RPG builders inXile Entertainment) and has released The Outer Worlds, which by all accounts has been a resounding success for the studio.