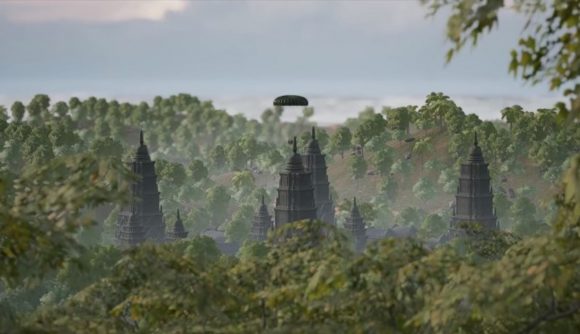 The next PlayerUnknown’s Battlegrounds update will switch gears from player vs. player to player vs. environment, according to one of the developers. A new weapon is coming to the battle royale game that will hopefully encourage players to get a little braver as rounds whittle down.

During the latest Dev Corner on community feedback, Dave Curd, the creative director of PUBG Corporation, dropped a hint on how the next patch shifts focus for the team and players. “8.2 introduces the decoy grenade, which really influences player-versus-player engagements,” he explains. “In 8.3, we have something in store that really is more player-versus-environment. It’s going to be a bit of equipment that allows for players to try to gamble on making a play towards the endgame.”

The decoy grenade added in PUBG patch 8.2 creates gunfire sounds wherever it lands when you throw, making it a potentially very useful asset in those tense stand-offs. Given that that’s an environmental power in its own right, it’ll be interesting to see what the next piece of inventory does to further shift the paradigm of combat on Sanhok. Curd fascinated to see what players make of it, too: “I’m really excited to see how the community responds to it.”

The start of season 8 brought an overhauled Sanhok that now has an armoured loot truck rolling through it. Erangel’s been getting some edits too, the last update bringing four new ports to the island.

PUBG patch 8.3 should roll out later this month – make sure to check out our PUBG guide if you’re thinking of parachuting back in.