Rage 2’s Arks are hidden across Avalanche’s large and mutant-infested open world and they are mission types you should absolutely not neglect. These mysterious constructs are only accessible to Rangers like yourself and they hide the many Rage 2 Nanotrite abilities and outlandish guns that will turn you from average Joe to supersoldier. Both are upgradeable and have perk trees associated with them, so make sure to commit the necessary Feltrite and Weapon Core Mods to your favourites.

So, where are all the Rage 2 Ark locations? After you’ve started the game and witnessed the destruction of your home of Vineland, the first few Arks are already plotted on your map to get you started. However, the rest are not, so we’re here to help you decide which one to visit first to make your blast through post-apocalyptic Earth as entertaining and smooth as possible.

You’ll be introduced to how Rage 2’s Arks work in the prologue, it’s very simple. Each one you approach will be guarded by a group of enemies and, once they’ve been turned into hundreds of teeny-tiny little pieces, you’re free to open the Ark. Then, after looting your lovely new bit of gear, a tutorial teaches you to use it, and more foes turn up for a delicious dose of target practise. So, let’s get into the specifics: here are the Rage 2 Ark locations and which ones you should access first.

You start the game at the southernmost point of the map and a good start is to approach the first few Arks already plotted on your map. An important detail to note is that each Ark in Rage 2 has a difficulty level attached from 1-10 – of which we’ll indicate below. A decent strategy is to tackle them in an ascending order of difficulty, giving you the best possible arsenal as you reach the tougher missions.

We’ve missed one weapon and one Nanotrite each from this list as you’ll get both just by completing the main story. Dash you’ll get in the opening mission – which is an immensely useful means of evading enemies – and you’ll get one of the best guns in the game, the Combat Shotgun, in John Marshall’s first main mission, Blackout, so get that done lickety split. 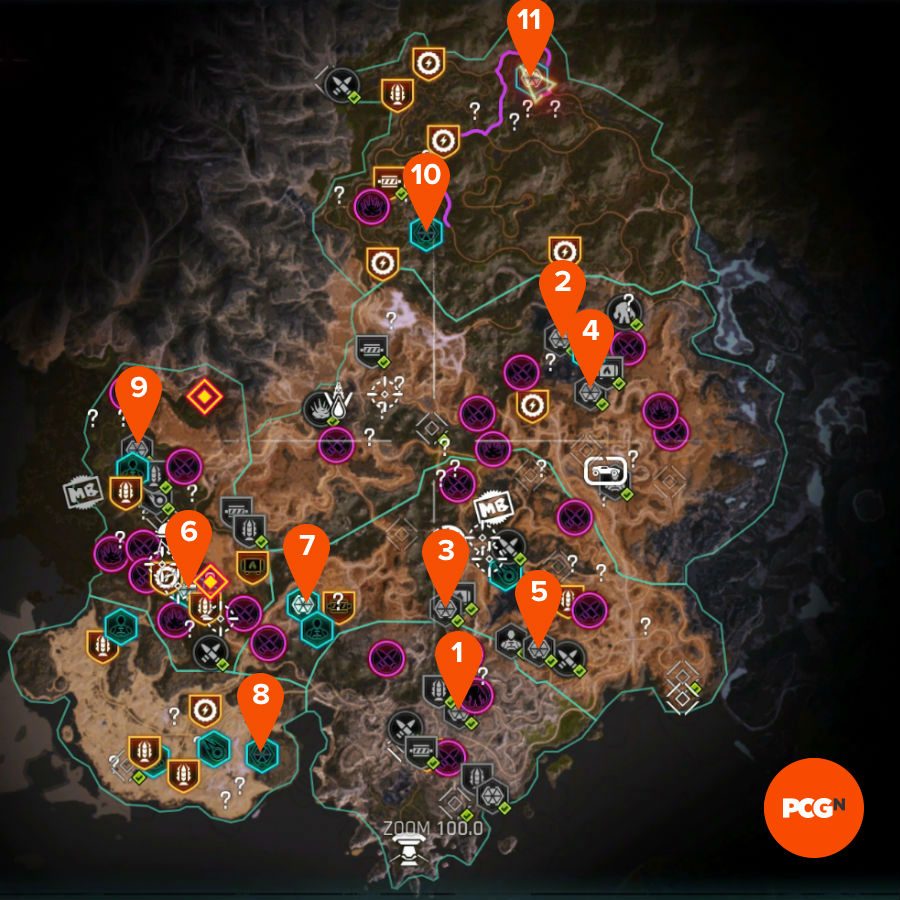 We’ve plotted all the other Rage 2 Arks in the game on the map above with a number that corresponds with the full list below. So here they all are:

We recommend heading straight to the Junker’s Pass Ark – it’ll be marked on your map in blue anyway, but you can get there by following the main road out from Vineland north until it’s on your right. In there is Shatter, a move that much resembles Force Push from Star Wars, and it’s as ruthless and violent as it is effective.

Another you need to get in your locker is the Defibrillator from Canyon Cove Ark, especially if you’re having a hard time. This, if you time the QTE effectively, revives you with some extra health on death. But, when it comes to the most fearsome weapon in the game, check out our guide on how to get BFG 9000 in Rage 2.

And there you are, those are all the Rage 2 Ark locations. You went into your first Ark a trembling wimp and you’ve emerged from your last the most powerful of divine death-doers. We’d ask you to thank us, but we’re a little terrified of you now, to be honest. Perhaps you should divert your fire elsewhere to the best FPS games on PC, instead. And, before you go, can we just say how handsome you’re looking today.