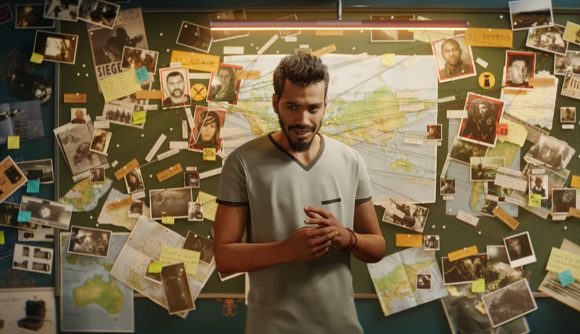 The latest Rainbow Six Siege trailer continues to pay dividends in teasing out new content for the game – this time with the proximity alarm, which appears to be a new secondary gadget set to hit in Year 4. Exactly how it’ll work remains to be seen, but we can probably make some educated guesses based on the name alone.

In the Hammer and the Scalpel trailer which debuted at the Six Invitational, there’s a big board pinned with all sorts of details about Six and its potential recruits. One element on the board shows the secondary gadgets already available in the game, along with one other that has a red arrow pointing towards it – a proximity alarm.

This isn’t the first time we’ve heard about proximity alarms – leaked voice lines for the Italian operators mentioned the gadget nearly a year ago. At the time, we thought it might be a hint toward their specialised equipment, but it seems Ubisoft was preparing early for a secondary which would be coming further down the line.

You can see the close-up here, as it appears toward the end of the trailer below.

This board also pointed us toward stealthy abilities for the upcoming Danish operator, and there might still be more to be uncovered.

Eyes up: Stay alert in the best FPS games on PC

The Burnt Horizon release date isn’t even here yet and we’re already trying to plot out the Year 4 roadmap. There’s plenty to come for Rainbow Six Siege in 2019, and it’s going to be a hint and leak filled ride to get there.