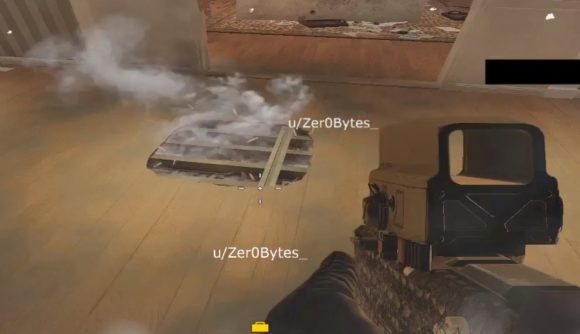 Earlier this month, we got a peek at what’s likely coming next for Rainbow Six Siege thanks to some shaky off-screen footage that leaked and was posted to Reddit. More clips have now emerged, and they form a much clearer picture of what’s in store for Year 5, including operator details, their new gadgets and abilities, as well as their loadouts and new weapon attachments.

The earlier leaks strongly suggested a tie-in with Splinter Cell, and that still seems to be the case for an upcoming operator code-named Scout, apparently due in Season 3. PC Gamer highlights a clip posted by redditor Zer0Bytes, which includes footage of both new operators in action. Scout has a gadget that in the work-in-progress build is called ‘secondary hard breacher.’ In the clip, Scout places this flat, square frame on a wooden floor, and a green laser tracks a circle onto the wood surface, kind of like a can opener, creating a good-size murder hole in the floor.

The drill camera Scout can bring is a bit hard to work out – at least four of the cameras can be fired out of a pistol-style launcher, and their vision can be seen through a pocket-sized device carried on the operator. Based on Zer0Bytes’ footage, it appears these can be used on any surface.

The second operator shown in the clip is defender Aruni, who appears to be on deck for Season 4. Aruni can launch a device called Surya Gate that attaches to the top of a doorframe and creates some kind of laser grid. The lasers are turned off when she gets close enough, but will presumably damage any attackers who try to walk through without disabling it first.

Aruni also has an enhanced prosthetic left arm, which she can use to punch through walls, barricaded windows, and wooden studs. In the video, she takes a while clearing out a big opening large enough to walk through, but it’s likely her ability will be more useful for making peepholes to shoot through. The backpack Aruni wears matches the colour of her prosthetics and is wired to them. It could be a battery – meaning her wall-punching ability may have a limited number of uses.

Aruni’s primary weapon is the P10 Roni, which is a submachine gun fashioned from a P10 pistol attached to a RONI carbine frame. She can also opt for the Mk 14 EBR, the .308 long-range battle rifle. Her sidearm is the PRB92 9mm, and she can choose barbed wire or the bullet proof camera as gadgets.

Zer0Bytes’ leaks also show the reworks for Chalet and Skyscraper, as well as a selection of potential new weapon optics that have never-before-seen magnification options. There’s also an image of what seems to be Tachanka’s elite skin – in which Tachanka goes shirtless to show off his tattoos.