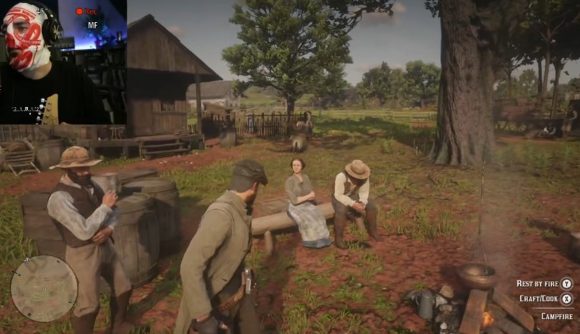 Blindboy Boatclub is a man of many trades – comedian, musician, podcaster, author, and most recently, streamer. Given that he can’t gig or travel for the time being, Blindboy’s turned to Twitch to have a more involved relationship with his audience, streaming Red Dead Redemption 2, and providing an improvised concert while he’s at it.

During a recent 90 minute stream, the plastic-bag-wearing artist brought out some instruments from his home studio to jam out a tune to accompany his wanderings in the old west. Looping a guitar riff and some other sounds, Blindboy then provided some, er, colourful commentary on the NPCs in his vicinity.

You can watch a four minute snippet featuring two brief tunes below. Although he’s better known nowadays for his short story collections and The Blindboy Podcast, for which guests have included John and Brenda Romero, the Limerick man first caught the public eye as one half of the satirical musical duo Rubberbandits. Together, Blindboy and his partner Mr. Chrome, who also wears a plastic bag over his head, had a string of viral hits including Dad’s Best Friend, I Wanna Fight Your Father, and Horse Outside, which was their biggest hit single.

Now that he’s joined the wonderful world of livestreaming, the content possibilities within Red Dead Redemption 2 are plentiful. One can indulge in scenic photography, or an involved roleplay, and there’s more than a few worthwhile mods, like this one that adds a zombie horde, or this one that shrinks Arthur to be miniature. It was one of our games of the year 2019 for a reason.

How my quarantine & not being able to gig is going. I’m playing red dead redemption 2 and instead of commenting, I’m using instruments to write and perform a soundtrack which is improvised on the fly. Highlights from Friday here. Give me a follow on twitch please. pic.twitter.com/QOba3NBKVe

Blindboy’s Twitch channel can be found here. He’s teased other bizarre ideas for the future, so keep an eye out for more Red Dead musical rambles.