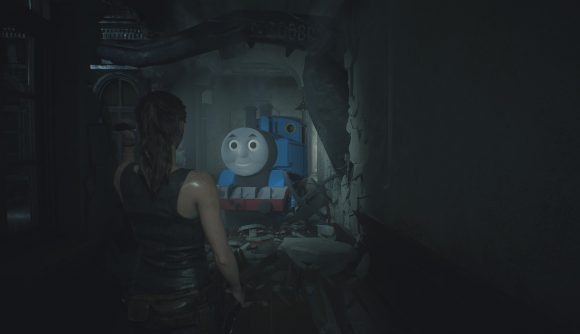 Mr. X is a pretty scary guy – he stalks the Raccoon City Police Department hunting down Leon and Claire in Resident Evil 2, and he’s nearly unstoppable in his pursuit. So how do you make this leathery, trenchcoat wearing menace even scarier? Swap him out with Thomas the Tank Engine, of course.

Naturally, there’s a mod that allows you to do just this. Thomas has shown up in mods before, replacing enemies in Falllout 4 and dragons in Skyrim. This may be his most frightening appearance to date, although there’s always been something vaguely upsetting about Thomas’ dead eyes and unmoving, rictus grin. Having him stomping down the halls, lit only by our heroes’ flashlights, is another level of unnerving.

The Thomas model can be found on Nexus Mods. This just swaps Mr. X with Thomas, leaving the sound effects untouched. However, for an extra layer of creepiness, you can also replace the music and SFX with Thomas’ theme and steam engine sounds, which helps sell the experience that much more. The sound effects swap can be found on the Steam workshop.

The T-00 tyrant called Mr. X has proven a popular subject for modders. One of the first popular mods for Resident Evil 2 replaced his theme music with DMX’s ‘X Gon’ Give It To Ya,’ because obviously that had to happen. Here’s the Thomas mod in action:

Other mods for Resident Evil 2 restore the original games fixed camera perspectives, and one modder has experimented with the game’s facial animations, the results of which are as horrific as anything the game throws at you.

Mods or not, we thought the Resident Evil 2 remake was a worthy successor to the original, even if it lacks some of the goofiness. Replacing Mr. X with Thomas the Tank Engine might help restore a little of that missing silliness.