Want to know how weapon upgrades work in Resident Evil Village? As you make your way through creepy castles and dangerous villages in Resident Evil, you need to upgrade your weapons to stay ahead of the curve. The pistol found at the beginning of the game becomes a glorified pea-shooter only a few hours in if you forget to upgrade it.

You can upgrade any weapon by heading over to The Duke’s Gunsmithy. Each gun features elements that can be enhanced, allowing you to customise every weapon to suit your playstyle. These upgrades don’t come cheap, however, so you’ll need to carefully consider every option before committing to anything, as you won’t be able to get a refund.

Weapon upgrades cost Lei, Resident Evil Village’s in-game currency. You can easily acquire money by killing enemies – most Lycans in the village areas drop valuable items, ammunition, and money when taken down. There are certain treasures like Crystal Skulls and Gems that Ethan can’t do anything with, but The Duke will happily purchase them. Here’s everything you need to know about weapon upgrades in Resident Evil Village.

HOW TO EARN MONEY IN RESIDENT EVIL VILLAGE

Resident Evil games have always encouraged players to explore the environment thoroughly, and Village is no exception to this. Make a habit of searching for hidden drawers and breakable boxes everywhere you go. Not only will you pick up key items to unlock brand new areas, but your inventory will be stocked up with treasures to sell to The Duke. It’s also worth noting that not all breakable items have handy prompts, so it’s worth seeing if something breaks to find any hidden items lurking inside.

There’s no guarantee that killing Lycans and other monsters like the Thralls in Castle Dimitrescu will drop anything valuable. That being said, your odds of receiving an item drop are surprisingly high. Unless you find yourself completely overwhelmed, it’s always worth killing any nearby enemies in hopes of picking up treasures.

Powerful enemies and Resident Evil Village bosses will always drop valuable treasures. Be sure to sell these items as you cannot do anything with them. Selling off a crystalised version of one of the bosses will usually net you over 25,000 Lei, more than enough to purchase several upgrades for your starter weapons. Large Lycans, Vârcolacs (Lycan Werewolves), and Heisenberg’s Soldats will also drop treasures, though they aren’t as valuable as the ones from bosses.

Though you can sell the meat acquired from killing the local animals, we strongly recommend against this. Animals don’t respawn, so if you sell the meat you won’t have any way of getting it back when you need it. There are only a handful of Resident Evil Village recipes, be sure to use your meat on these dishes and they provide you with permanent upgrades. 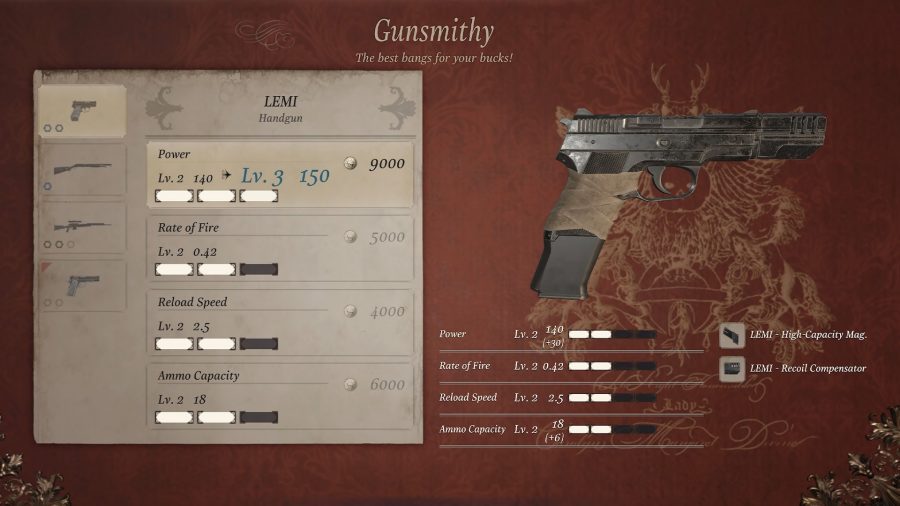 Choosing which weapon upgrades to prioritise is usually down to personal preference. Accurate shooters will want to go with power upgrades every time to deal more damage per bullet. The inventory system in Resident Evil Village is similar to Resident Evil 4, forcing players to make careful decisions about what items they carry. If you want to limit the amount of ammo you have to lug around, upgrade your ammo capacity to use twice the number of magazines when reloading. You can also upgrade your inventory size, but this is very expensive early on.

New weapons are introduced at The Duke’s Emporium at certain points in the game. When these weapons appear, you should sell off your upgraded guns to purchase the ones in the store. While you may want to keep hold of your first weapons, they won’t be able to take you through the game as their base stats even when upgraded are lower than the stock new weapons. Any upgrades you’ve purchased will increase the price of your weapon, so you don’t have to feel like you’ve wasted any money.

Depending on how you prefer to play the game, you may want to sell certain weapons if you don’t ever use them. Selling any weapon to The Duke will place the gun, along with all of its upgrades, in The Duke’s inventory until you decide to buy it back. Of course, he won’t sell the weapon back to you at cost, but at least you have the option of getting it back when you have the money.

Before you decide to upgrade that magnum you found, think about how often you find ammo for that weapon. Certain ammo types are harder to come by, forcing you to craft ammo at a workbench or spend Lei at The Duke’s Emporium. Pistol and shotgun ammo are usually the most commonly found ones in Resident Evil games, so it’s worth prioritising these weapons in the early game.

There are some weapon upgrades that cannot be purchased from The Duke. These upgrades usually come in the form of high-capacity magazines, cheek rests for sniper rifles, and hair triggers for shotguns. Finding these upgrades can be tricky, and sometimes you only have a brief window to claim them before an area is locked off forever.