Want to know where the Goat of Wardings are in Resident Evil Village? Scattered throughout the mysterious village, and the Dimitrescu mansion that looms over it, are little, tiny wicker goats. They make a sound when their heads bop back and forth, and are the main collectibles which you can find, as well as the four Resident Evil Village labyrinth balls.

Fun fact: wicker goats are a cultural icon in certain parts of mainland Europe, most notably the Gälve Goat or ‘Gävlebocken’ appears annually at Slottstorget in the town of Gälve, Sweden commemorating the holiday season.

Although sadly it has previously been the victim of arson attacks, thankfully recent years have been kind to the Gälve Goat (it’s survived the past four years untouched). The same can’t be said for the Goats of Warding; they’re unguarded and destroying them apparently incurs the wrath of Mother Miranda, though really it just nets you a lot of completion points to spend on bonus weapons. In this guide we will tell you where every Goat of Warding location is. Warning: there are spoilers in this guide, so be aware of that before proceeding.

HOW TO FIND THE GOATS OF WARDING IN RESIDENT EVIL VILLAGE

As you enter the village, you’ll see a small shrine to the right of the path that leads up to the crypt. Inside the shrine is a Goat of Warding. You’ll know when one is nearby as its head rocks, making a sound that’s quite distinct.

Much like the collectibles from recent Resident Evil games, these collectibles need to be destroyed in order to ‘collect’ them. You can do this simply by swiping at them with the knife, or shooting at them. It’s perhaps a bit of a waste to shoot them if they’re easily accessible, so try to save your bullets for the ones that are out of reach (and trust us, like real goats, these can reach very high places).

Once destroyed, they will disappear forever, so you won’t need to keep track each playthrough of which goats you’ve found. Unlike hunting animals in Resident Evil Village that are necessary for making Resident Evil Village recipes, these creatures aren’t all that difficult once you know where they are, and you only need to hit them once to clear them.

We also recommend keeping at least one save in each of the main areas. This is so that if you miss a goat, you can backtrack when needed. 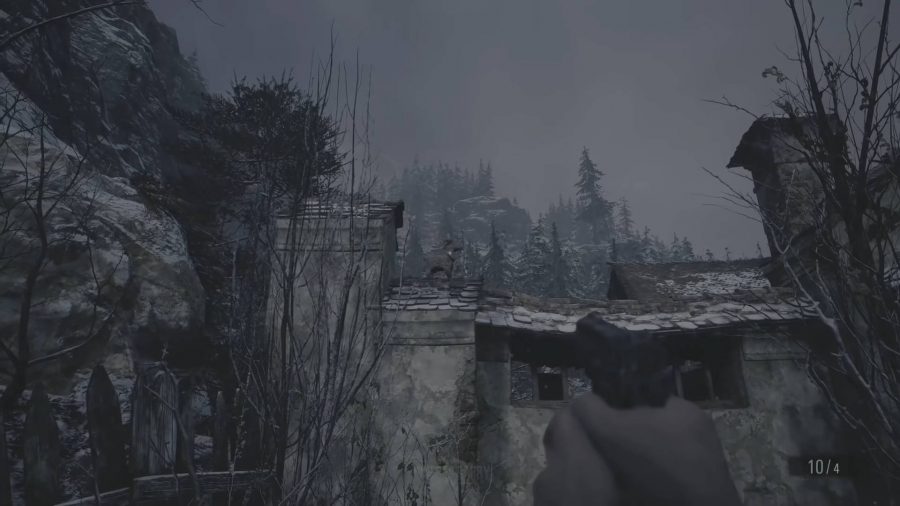 Here is every single Goat of Warding location in Resident Evil Village. Each goat is in its own segment of the map, just so you have an easier time working out if you’ve found every goat in the area. That said, there are two exceptions as the Reservoir and Heisenberg’s Factory have multiple goats, some of which are missable.

As you enter this part of the village, you’ll see a small shrine to the right of the path up towards the graveyard. Inside the shrine is the first Goat of Warding.

Look at the roof of the church to find a goat on top.

When you reach the field with Lycans in it, you can hop the fences in the top-left corner of the field and shoot the goat that’s perched on the stone wall at the back. 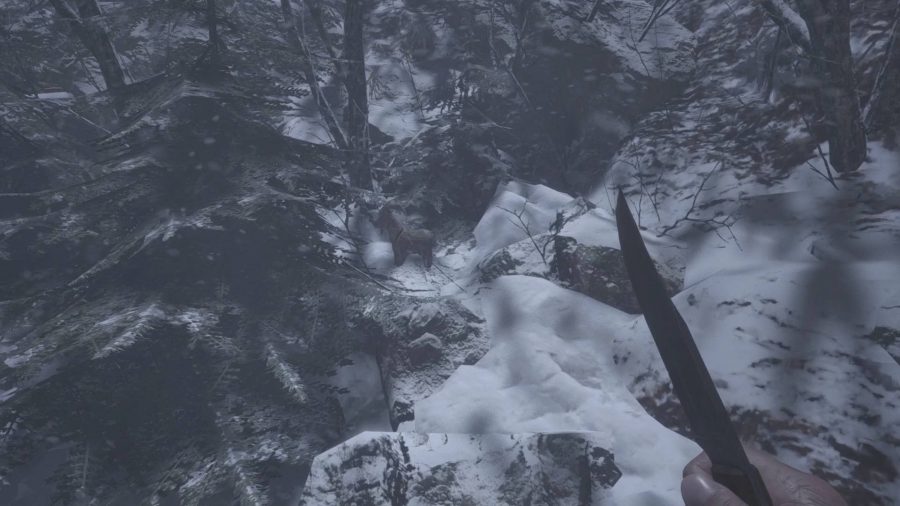 As you emerge from Heisenberg’s trap and go up the elevator, turn right by the scarecrows and vineyard. Head to the scarecrow on the far side of the vineyard. The goat is to its left. Do not proceed into the mansion before collecting this goat as it is missable.

After climbing down the ladder to the distillery, the goat is behind you next to the torture chair.

When you climb into the attic, turn around. The goat is on top of some boxes.

Heading back towards the village from the Ceremonial Site, and take a left down the stairs after crossing the bridge. Turn left at the bottom and double back. In the cavern underneath is the goat.

When you return to the village with the Iron Insignia key, unlock the gate behind the church where the chickens are. Turn right and head for the furthest crypt. It’s on the crypt’s right-hand side, buried in the snow. 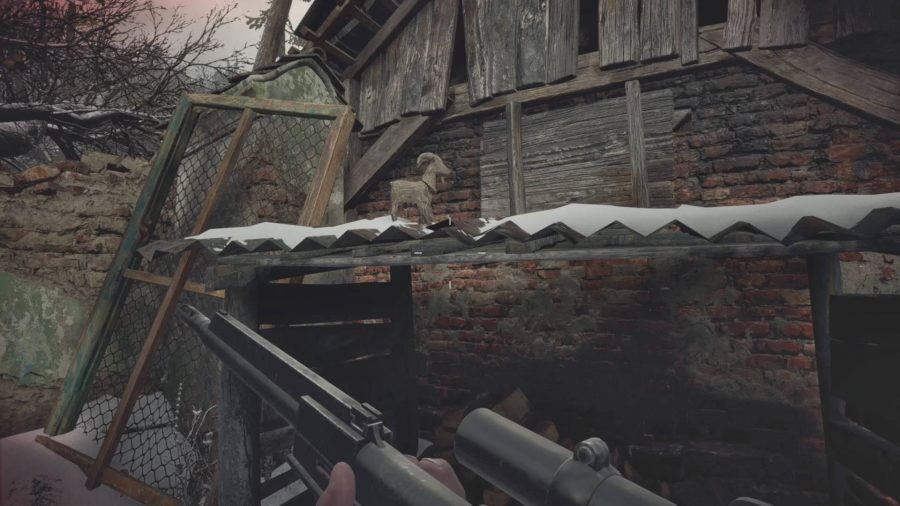 Next to Luthier’s violin house, the one with the violin house combination code, there is a barn. On top of the shelter is another goat.

Just before opening the doors to the main house, go around the patio. There are some stairs leading down to a small lawn. At the bottom of the stairs, turn right and look at the fence to find a precariously balanced goat. Make sure you get this one before taking the elevator back down towards the village.

Either as you’re making your way to the Beneviento house, and completing the Resident Evil Village mannequin puzzle, or after beating Donna Beneviento, head back across the bridge, looking to the right. There is a goat on the other bridge.

When you reach the first windmill after Moreau transforms, head all the way around it from the outside. The goat is by some logs. This one is missable if you descend to the boss battle.

As you’re traversing the flooded area, trying not to be eaten by Moreau, you’ll find a switch covered in maggots. Turn around and look at the wooden pole in the distance. There is a goat perched on top. This one is missable if you descend to the boss battle. 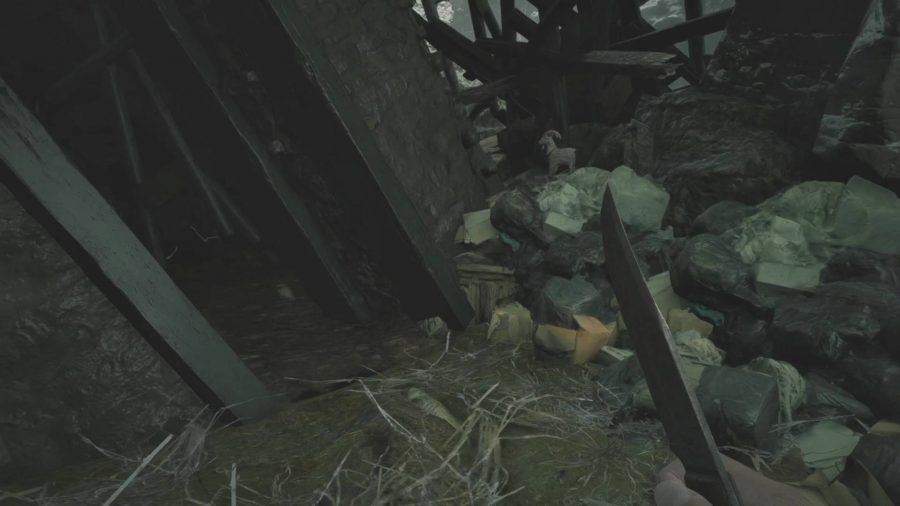 After beating Moreau, head back towards the fisherman’s house. A new path has opened to the left that leads to some catfish. On the way back, look to the right side to find a goat perched on top of some trash.

Underneath the mill, there is a shrine with a goat inside of it.

There is a spiral staircase as you reach the northernmost part of the area. At the centre of it is a well, with some buckets on the side. The goat is next to the buckets.

Just after climbing up the Grinder, you’ll be sucked into a ventilation tower. After recovering from this ordeal, turn around and head back towards the Grinder. You’ll find the goat impaled onto a bit of steel on the floor right at the end of the ventilation shaft.

Just before the cargo bay, there is a small hole in the office. Crawl through the hole and you should find the goat. 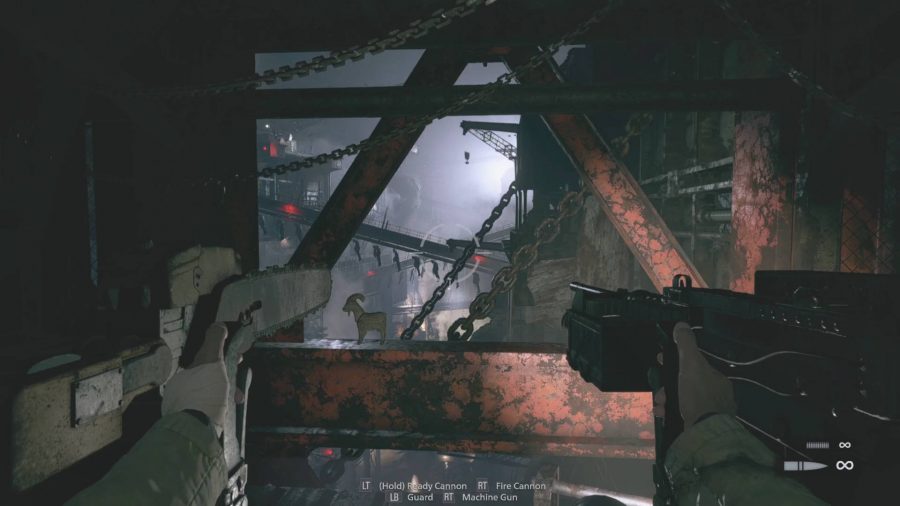 As you get the tank that Chris gives you, head up the lift to fight Heisenberg, one of the Resident Evil Village bosses. Don’t turn around. You should be able to see a goat as you head up, just after the first steel gate. This one may take a few tries, so reload your save from just before boarding the tank if you miss it.

When you reach the Megamycete and throw an explosive into the giant red thing, look at the statue to your right near the spikes in the dark area. You should see the last goat at the base of this statue.